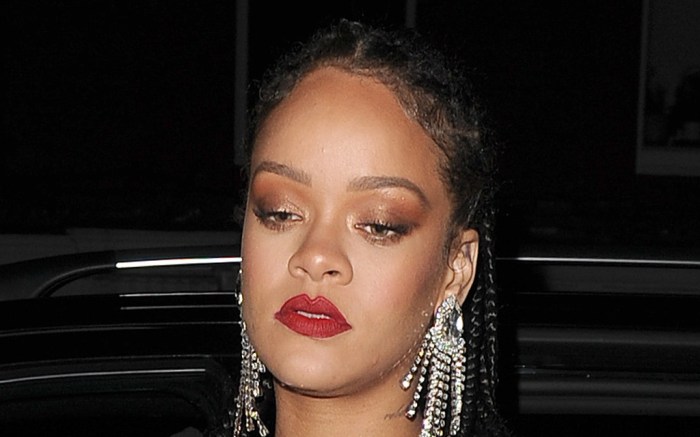 Rihanna brought Pride Month to a close in the boldest way — and we wouldn’t expect anything less.

The “What’s My Name” musician promoted her Savage x Fenty Pride collection on Instagram last night by modeling new pieces from the collection including a rainbow-adorned thong and thigh-high stockings; both colorful pieces are available at SavageX.com. Rihanna then completed the look with an easygoing black tee, gold chain jewelry and her favorite see-through shades.

She explained in the caption of yesterday’s post that for Pride Month, proceeds from the collection will benefit five organizations dedicated to helping LGBTQIA+ causes and communities.

When it comes to Rihanna, her style is never lacking in color and eccentric pairings.

Back in May, for example, The “Umbrella” singer stopped by her favorite restaurant Giorgio Baldi in bold fashion, layering a vintage Dior tie-dye coat over a Hyein Seo peek-a-boo crop top; similar coats resell for over $20,000 while her top sells for $210. The statement pieces then came matched to even wilder pants with a custom green and white tie-dye finish from Chrome Hearts.

The finishing touch of the “Believe It” musician’s ensemble came with her choice of glowing white footwear. The almond-toe pumps peeped out from under the hem of her pants with a smooth patent finish and a squared heel.

As for Rihanna herself, the multihyphenate is a major force in the fashion world, beyond her impeccable personal style. Her first major foray into designing occurred when she signed with Puma in 2014. In September 2015, she went on to create her first-ever Fenty (an ode to the superstar’s surname) product, the Fenty Puma Creeper, which won Rihanna her first FN Achievement Award for Shoe of the Year in 2016. She also has since worked with Amina Muaddi for a series of must-have shoe designs which then earned the “Diamonds” singer her second FNAA in 2020.

Flip through the gallery for more of Rihanna’s risk-taking style over the years.