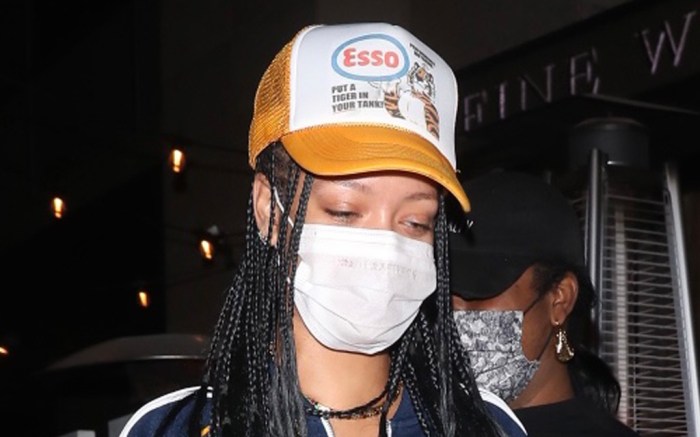 Rihanna channeled the 1990s and early 2000s with ease as she stepped out for dinner at Wallys in Beverly Hills, Calif., this week.

The “What’s My Name” musician opted for an elevated twist on comfortable style, modeling a matching Adidas tracksuit; the navy number came complete with a coordinating zip-up jacket and navy joggers with a yellow and white Three Stripes trim. She also added in another retro-chic touch with her graphic trucker hat.

Athletic attire and loungewear have become the new normal when it comes to celebrity style. Amidst the current health crisis, the world of fashion is turning towards clothing that provides a sense of comfort and stability with ease of wear; that includes everything from biker shorts and silky pajamas to athleisure like Rihanna’s pick.


To give the throwback-inspired look a modern-day twist, the “Umbrella” musician herself then slipped on a set of glittering thong sandals set atop a square toe and lifted heel.

Thong-toe footwear returned to the celebrity scene last year as one of spring and summer’s biggest trends and is expected to stick around in 2021. Be it classic flip-flops or thong-toe heels, the minimalistic silhouette falls in line with a ’90s-inspired revitalization of fashion, as seen with shoes like square-toe styles and pops of neon color. Stars like Kim Kardashian along with Meryl Streep and Gabrielle Union amongst other major names are continuing to support the trend in even cooler temperatures.


As for Rihanna herself, the multihyphenate is a major force in the fashion world, beyond her impeccable personal style. Her first major foray into designing occurred when she signed with Puma in 2014. In September 2015, the “Believe It” singer went on to create her first-ever Fenty (an ode to the superstar’s surname) product, the Fenty Puma Creeper, which won Rihanna her first FN Achievement Award for Shoe of the Year in 2016.

Go bold like Rihanna in these pieces inspired by her look.

Click through the gallery to find more of Rihanna’s risk-taking style over the years.