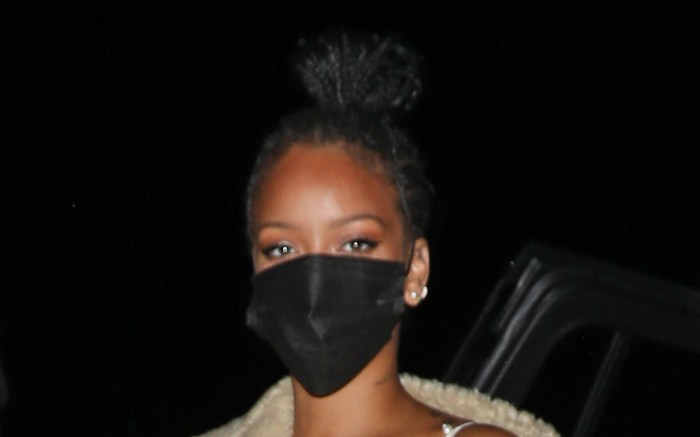 Rihanna proved that when it comes to hitting the town, more is always better.

The “Diamonds” singer stepped out for a chic dinner date in Los Angeles on Tuesday, opting for a selection of silky designs including a pearl-adorned slip dress; she also layered in her new favorite shearling-lined leather R13 jacket to keep warm at night.

Slip dresses like low-rise bottoms and soft cardigans are returning to the fashion scene amongst a mix of late 1990s and early 2000s trends, favorited by Irina Shayk, Chrissy Teigen, Bella Hadid and more.

Continuing the sleek appeal of her ensemble, the “Believe It” musician matched her shoes to her dress in a set of satin-coated boots. The soft gold pair featured a pointe-toe design, a slouchy upper and a lifted heel for an elevated boost.

The Barbados native, who just reportedly filed a trademark for “Fenty Hair,” hit up celeb-favorited restaurant Giorgio Baldi in style, layering her oversize outerwear with a lace-trimmed, 2000s-style camisole. The chic pieces continued with a striped fuzzy cardigan and matching green graphic sweats to pull the on-trend appeal together.

As for Rihanna herself, the multihyphenate is a major force in the fashion world, beyond her impeccable personal style. Her first major foray into designing occurred when she signed with Puma in 2014. In September 2015, the “What’s My Name” musician went on to create her first-ever Fenty (an ode to the superstar’s surname) product, the Fenty Puma Creeper, which won Rihanna her first FN Achievement Award for Shoe of the Year in 2016. She also has since worked with Amina Muaddi for a series of must-have shoe designs which then earned the “Love On the Brain” singer her second FNAA in 2020.

Click through the gallery to discover even more of Rihanna’s risk-taking looks over the years.