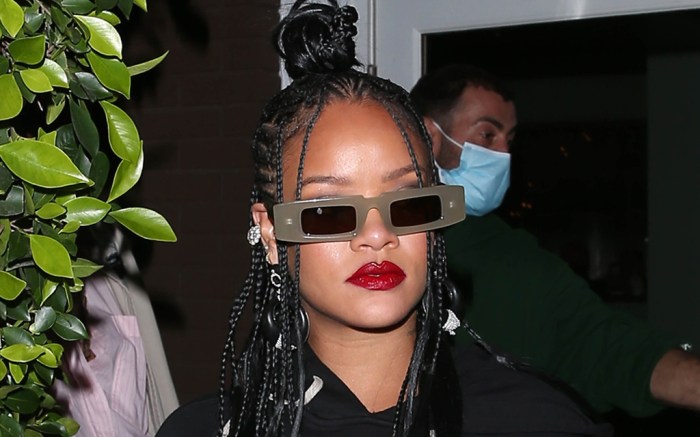 Rihanna enjoyed a Sunday night on the town in style, hitting one of her favorite restaurants in Santa Monica.

Spotted leaving Giorgio Baldi last night, the “Umbrella” musician opted for a twist on the monochrome trend that kicked off with a wild sweatshirt design; the unique cutout hoodie opened up to reveal a leather mini skirt beneath its floor-sweeping silhouette.

When it came down to footwear, the Grammy Award-winning singer tapped another growing trend for the next season: ankle-wrap sandals. Favored by Kim Kardashian, Lizzo, Cardi B and more, these heels snake across the ankle and calf for a standout punch and a supported fit.

As for Rihanna herself, the multihyphenate is a major force in the fashion world, beyond her impeccable personal style. Her first major foray into designing occurred when she signed with Puma in 2014. In September 2015, the “What’s My Name” musician went on to create her first-ever Fenty (an ode to the superstar’s surname) product, the Fenty Puma Creeper, which won Rihanna her first FN Achievement Award for Shoe of the Year in 2016. She also has since worked with Amina Muaddi for a series of must-have shoe designs which then earned the “Love On the Brain” singer her second FNAA in 2020.

Click through the gallery to find more of Rihanna’s boldest style moments over the years.