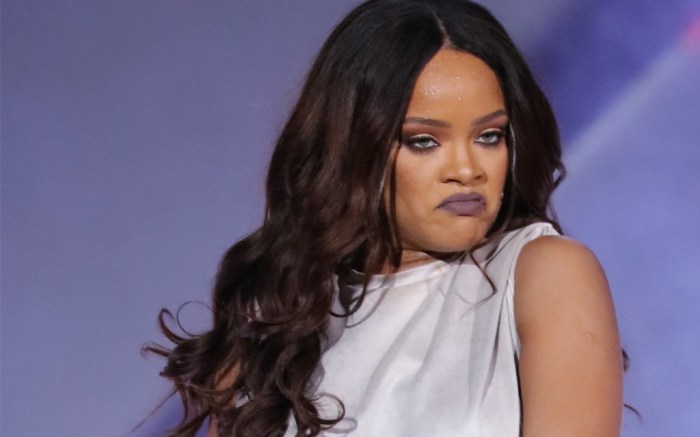 It’s Rihanna’s world and we are all just living in it.

The “Needed Me” singer modeled for her own brand, Savage x Fenty, over the weekend in signature bold fashion. As seen on the intimates label’s Instagram page, Rihanna went for a dip in the pool in glittering anklets and a backless red catsuit. The piece comes from the brand’s summer collection and retails for $75 online.

While they’ve been around for decades, catsuits are making a triumphant return to the fashion scene this year. Spotted on the likes of Kylie Jenner, Irina Shayk, Megan Thee Stallion and more, the streamlined silhouette offers an effortlessly chic way to upgrade your everyday attire.

Anklets, too, became a must-have accessory throughout the 1990s and have since experienced a revival in tandem with a revitalization of major ’90s style trends, including square-toe footwear, mom jeans and platforms.

Earlier this month, the “What’s My Name” musician joined her beau A$AP Rocky for a celebratory night on the town on Thursday, hitting up a party in New York until late hours. For the event, Rihanna herself channeled Y2K trends in a halter scarf top with shredded $2,100 Balenciaga jeans and exposed boxer shorts.

For footwear, the singer continued her own vintage-inspired moment in thin-strap snakeskin sandals wrapped over her jeans.

The multihyphenate is a major force in the fashion world, beyond her impeccable personal style. Rihanna’s first major foray into designing occurred when she signed with Puma in 2014. In September 2015, she went on to create her first-ever Fenty (an ode to the superstar’s surname) product, the Fenty Puma Creeper, which won the singer her first FN Achievement Award for Shoe of the Year in 2016. She also has since worked with Amina Muaddi for a series of must-have shoe designs which then earned the “Diamonds” singer her second FNAA in 2020.

Flip through the gallery for more of Rihanna’s daring style over the years.