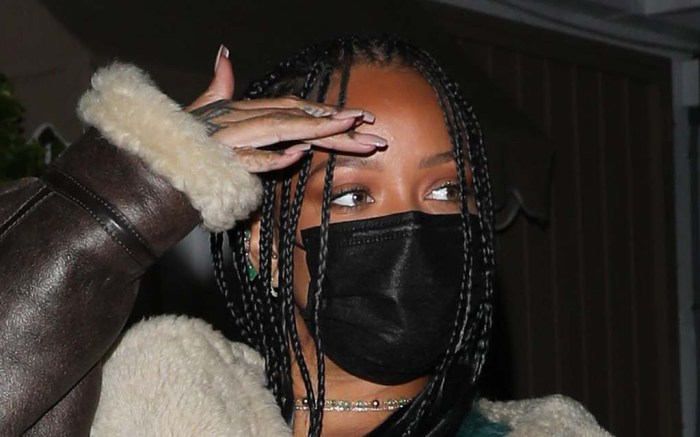 Rihanna combined a mix of spring’s biggest trends for her dinner outing in Santa Monica this week.

The “Believe It” singer, who just reportedly filed a trademark for “Fenty Hair,” hit up celeb-favorited restaurant Giorgio Baldi last night in style, layering an oversize leather and shearling coat with a lace-trimmed, 2000s-style camisole. The chic pieces continued with a striped fuzzy cardigan and matching green graphic sweats to pull the on-trend appeal together.

Spaghetti strap camisoles, as well as retro-chic cardigans, are both experiencing a moment on the fashion scene amidst revitalizations of late 1990s and early 2000s trends such as combat boots and low-rise bottoms.

The “What’s My Name?” singer tapped one of her favorite footwear designers Amina Muaddi. The designer and Rihanna themselves first joined forces for their inaugural joint Fenty footwear collection in July 2020. Since then, the collection went on to become one of the biggest of 2020, earning it the title of the FNAA Collaborator of the Year during last year’s virtual show.

The pair from yesterday’s outing comes in the form of Muaddi’s Ursina pumps. Set atop a 4-inch stiletto heel, the glowing white silhouette includes an elongated pointed-toe front, rounded silhouette and a green crystal-embellished ankle strap. You can shop Rihanna’s choice of stilettos for $998 at MyTheresa.

Click through the gallery to look back at more of Rihanna’s top style moments over the years.