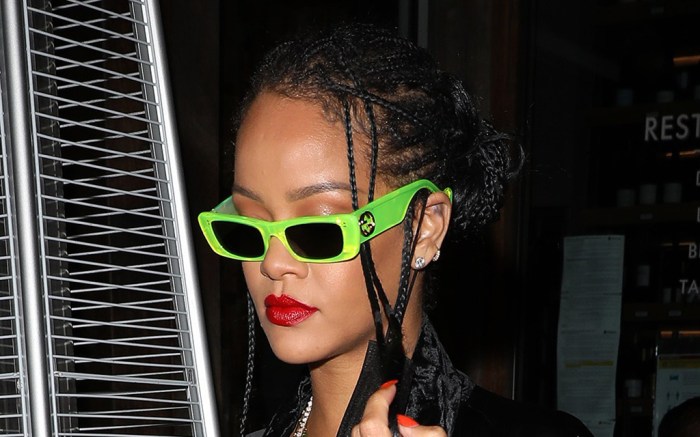 Rihanna made a case for elevated loungewear at the dinner table this week as she hit Wally’s restaurant in Los Angeles.

Stopping by one of her favorite eateries last night, the “Umbrella” musician tackled spring trends in the silkiest black robe matched to coordinating satin pants and a lace camisole.

Pajama-inspired loungewear has become the new normal when it comes to celebrity style. Amidst the current health crisis, the world of fashion is turning towards clothing that provides a sense of comfort and stability with ease of wear; that includes everything from boxer shorts and hoodies to slip dresses and sleek sets like Rihanna’s pick.


On her feet, Rihanna continued the comfortable appeal of her look by trading her typical heels and sandals for a more casual yet still buzzy sneaker. The two-tone kicks came coated with a slick purple leather finish set atop white perforated uppers and a coordinating eggplant outsole, bearing resemblance to Nike’s hit Dunk High silhouette that released in December 2020. Titled the “Varsity Purple” colorway, the design pulls inspiration from the Japanese exclusive “City Attack” Dunk High which released in 1999.

While Rihanna’s pair released with an original asking price of $120, pairs now resell for upwards of $240 to $385 at Farfetch.

As for Rihanna herself, the multihyphenate is a major force in the fashion world, beyond her impeccable personal style. Her first major foray into designing occurred when she signed with Puma in 2014. In September 2015, the “Believe It” singer went on to create her first-ever Fenty (an ode to the superstar’s surname) product, the Fenty Puma Creeper, which won Rihanna her first FN Achievement Award for Shoe of the Year in 2016.

Channel Rihanna with ease in these two-tone sneakers inspired by her look.

Click through the gallery to find more of Rihanna’s standout style over the years.