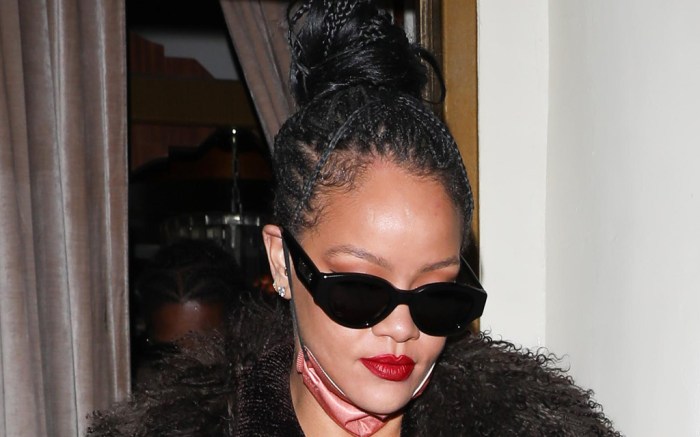 Rihanna and A$AP Rocky stepped out for a rare appearance together as they joined fellow stars for an event hosted by fellow musician Drake.

Together, the duo was spotted leaving the Delilah restaurant in Los Angeles on Sunday night. In bold fashion, the “Umbrella” musician decided on a monochrome look that layered the furriest brown leather coat over a textured and fringed minidress. Her “Praise the Lord” rapper counterpart decided on leather attire as well, matching a coordinating jacket and pants with a graphic tee.

To complete the look, the “What’s My Name?” singer appeared to tapped one of her favorite footwear designers: Amina Muaddi. The designer and Rihanna themselves first joined forces for their inaugural joint Fenty footwear collection in July 2020. Since then, the collection went on to become one of the biggest of 2020, earning it the title of the FNAA Collaborator of the Year during last year’s virtual show.

The glittering and braided sandals chosen by Rihanna last night bear resemblance to a collaborative design from her Fenty x Amina Muaddi debut collection. Though initially released in a lighter tan colorway, the silhouette features an ankle-wrapping finish atop a square-toe base and a structured heel.

As for Rihanna herself, the multihyphenate is a major force in the fashion world, beyond her impeccable personal style. Her first major foray into designing occurred when she signed with Puma in 2014. In September 2015, the “What’s My Name” musician went on to create her first-ever Fenty (an ode to the superstar’s surname) product, the Fenty Puma Creeper, which won Rihanna her first FN Achievement Award for Shoe of the Year in 2016.

Click through the gallery to find more of Rihanna’s risk-taking footwear moments over the years.