Rihanna Is So Y2K in a Scarf Top, Shredded Jeans & Snakeskin Sandals With A$AP Rocky 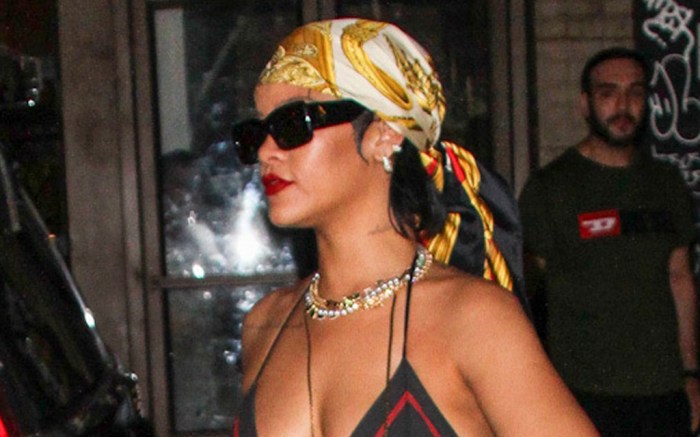 Rihanna is making a case for retro fashion, even on the late-night shift.

The “What’s My Name” musician joined her beau A$AP Rocky for a celebratory night on the town on Thursday, hitting up a party in New York until late hours. For the event, Rihanna herself channeled Y2K trends in a halter scarf top with shredded $2,100 Balenciaga jeans and exposed boxer shorts.

Headscarves, too, are about to be everywhere this season amidst a revitalization of early 2000s trends. Spotted decades ago on the likes of Hilary Duff, Paris Hilton, Jennifer Lopez and even Christina Aguilera herself, bandanas and tied-up hair scarves offer the perfect solution to a bad day while still staying en vogue this spring.

As for A$AP Rocky, the rapper also tapped into trends from the 1990s and early 2000s in a white tank top and sleek black overalls. The finishing touch for the throwback look came in the form of patent black boots with a lugged outsole and chunky appeal.

For footwear, Rihanna too continued her own vintage-inspired moment in thin-strap snakeskin sandals wrapped over her jeans.

As for Rihanna herself, the multihyphenate is a major force in the fashion world, beyond her impeccable personal style. Her first major foray into designing occurred when she signed with Puma in 2014. In September 2015, she went on to create her first-ever Fenty (an ode to the superstar’s surname) product, the Fenty Puma Creeper, which won Rihanna her first FN Achievement Award for Shoe of the Year in 2016. She also has since worked with Amina Muaddi for a series of must-have shoe designs which then earned the “Diamonds” singer her second FNAA in 2020.

Go bold like Rihanna in these heels inspired by her look.

Flip through the gallery to find Rihanna’s risk-taking style over the years.