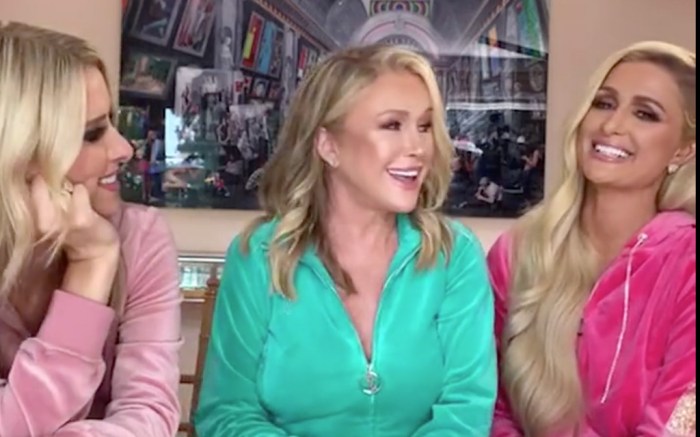 With the revitalization of trends from the early 2000s taking over the fashion scene, it was only a matter of time until we saw the Hiltons in velour again.

Never ones to disappoint, Paris, Nicky and even their mom Kathy Hilton all coordinated their looks yesterday in matching Juicy Couture tracksuits. Paris and Nicky opted for pink takes on the beloved early aughts ensemble, while Kathy modeled a bright green iteration, as seen on her Instagram Live last night.

The coordinating outfits were no coincidence, either. In fact, the entire moment was pulled together by Footwear News. The Hilton trio serves as the upcoming cover stars for FN’s next print edition, which releases on Aug. 2.

“I had so much fun having both of my girls with me today! Exciting things coming up,” teased Kathy in her own caption.

Nicky Hilton recently hosted a summer dinner event with French Sole to promote her next footwear collaboration. She first released a capsule collection with French Sole in February 2019. The collection was Hilton’s first foray into designing footwear but she has been sporting styles from the brand since high school. While Hilton was first dipping her toes into shoes, she has previously designed apparel, handbags and jewelry.

“This was the missing link,” she told FN when the shoes launched. “It was a fun experience that was completely new and different compared to clothing. If I want to put a bow on a shoe, I can [choose] from thousands. The options are endless.”

“I love Nicky’s French Sole Shoes,” Paris told FN at the 2019 FNAAs. “Every time a new collection comes out, I get a whole box with new shoes.” Paris herself has a namesake footwear line that’s been thriving for over a decade. The entrepreneur also extended her reach by opening over 40 retail stores and running her own DJ business, as well as a slew of namesake fragrances.