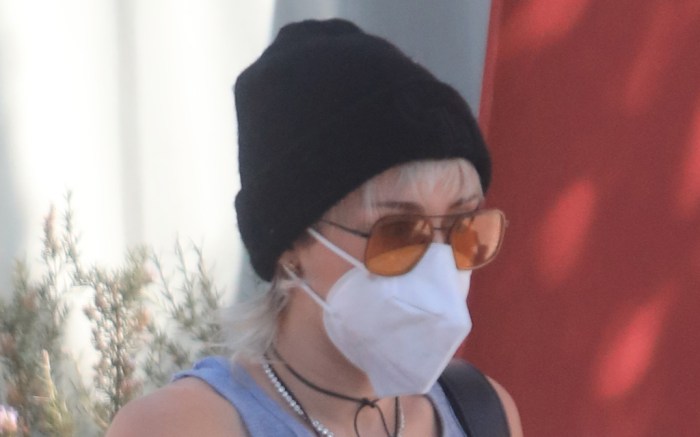 Miley Cyrus brought back one of the 2000s most disputed trends as she jetted off towards New York City this week.

The musician, who is set to appear on “Saturday Night Live” this weekend, gave fans a look at her first-class travel attire on Wednesday night live from her Delta flight’s bathroom. For the long flight, Cyrus settled in wearing a printed oversize sweatshirt with matching gray sweats and a protective pink face mask.

The unexpected element of her look came with her choice of a statement accessory: a red diamond necktie. A few decades back, layering a tie over your outfit became the new norm perpetuated largely by that of Avril Lavigne’s style both on and off the red carpet. Though styling move was less common than early aughts favorites like low-rise jeans and lace camisole tanks, it was still a frequent trend amongst edgier celebrity style stars.

Cyrus herself is no stranger to an edgy style moment, either. Last month, for example, she pulled off one of footwear’s most discussed styling trends with a little help from Gucci.

The “Prisoner” musician modeled for the Italian fashion house this afternoon as part of its #GucciAria campaign for a new book of riddles, puzzles and crosswords revolving around the brand. Cyrus gave her take on spring’s suiting trend in the video in a logo-coated green set layered over a white blouse with oversize shades to match.

As for footwear, the “Hannah Montana” alumna herself chose a daring move by layering her platform silver wedges over soft green socks. Footwear fans go back and forth on their thoughts on socks and sandals. While the combination is considered disharmonizing by some, others prefer the layering as it allows you to wear your favorite open-toe designs year-round.

As for Miley Cyrus herself, the singer is no stranger to a stir-causing style moment. While she is best known for her hit albums and box office films, the “Slide Away” musician also dips her toes in the fashion and shoe space. The former Disney Channel star made an appearance on the runway at the Marc Jacobs’ fall ’20 show and has also sat front row at shows for top labels such as Tom Ford and Saint Laurent. She also has worked with Converse on a series of pride-filled shoe collections.

Flip through the gallery for more of Miley Cyrus’ wild style transformation over the years.