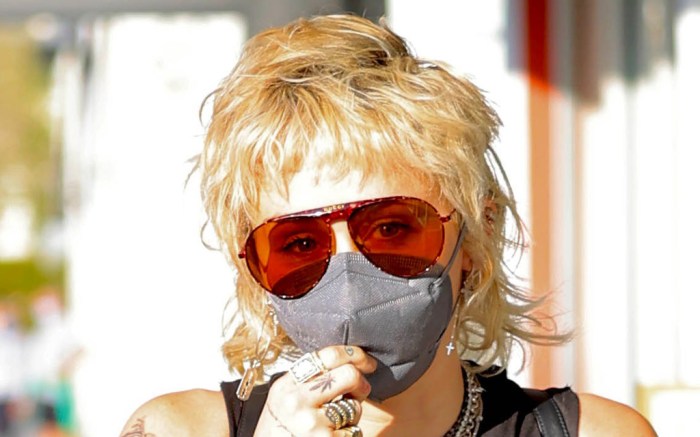 Miley Cyrus hit the tarmac in bold fashion this weekend, joining what she reinvented as the “MILEy HIGH CLUB.”

Opting for a 1990s era look, the “Plastic Hearts” musician strutted her way across an airport runway in a striped $950 Gucci sweater vest and belted low-rise jeans. The outfit also included a casino-inspired trucker hat, oversize shades and one final retro touch: an oversize leather shirt.

A sleek piece of leather attire has become one of the biggest trends this winter — and now this spring, too. Whether in the form of pants, a skirt or, in Miley’s case, a shirt, the effortlessly cool material offers an easy way to add a glam yet edgy touch to all looks. As exemplified by the likes of Katie Holmes, Kendall Jenner, Zoe Kravitz and more, the retro-chic fabric is here to stay for the new decade.

Though her shoes weren’t captured inn the video, Miley’s choice of footwear already made headlines earlier this week. Courtesy of her friend and fellow musician Lil Nas X, the shoes are a newly released design that have been causing quite the stir; The MSCHF x Lil Nas X “Satan Shoes” reimagine a classic Nike Air Max 97 silhouette with black uppers and red detailing, finished off with a symbolic charm.

While the sneaker appears to have been made in collaboration with Nike, the athletic powerhouse clarified that it had no part in the creation of the shoe. “We do not have a relationship with Little Nas X or MSCHF. Nike did not design or release these shoes and we do not endorse them,” a Nike spokesperson told FN on Sunday.

In fact, Nike took the issue a step further and filed a trademark infringement and dilution complaint against MSCHF on March 29. According to an NBC News report, a judge in the Eastern District of New York ruled that MSCHF must stop fulfilling “Satan Shoes” orders after Nike filed for a temporary restraining order Tuesday.

As for Miley Cyrus herself, the singer is no stranger to a stir-causing style moment. While she is best known for her hit albums and box office films, the “Hannah Montana” alumna also dips her toes in the fashion and shoe space. The former Disney Channel star made an appearance on the runway at the Marc Jacobs’ fall ’20 show and has also sat front row at shows for top labels such as Tom Ford and Saint Laurent. She also has worked with Converse on a series of pride-filled shoe collections.

Click through the gallery to discover more of Miley Cyrus’ most memorable looks over the years.