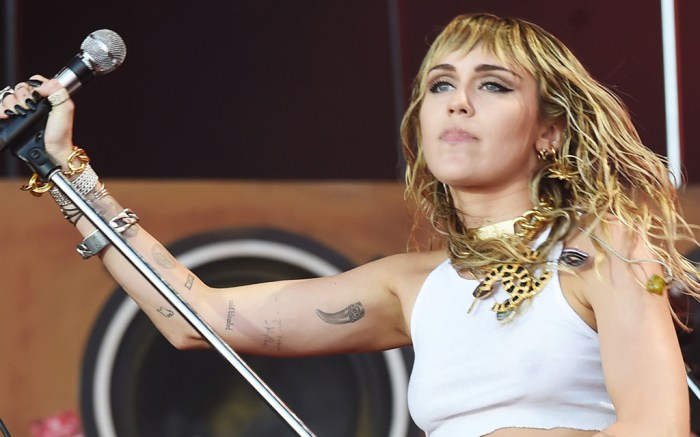 Miley Cyrus channeled the 1980s for her Lollapoolaza performance last night in Chicago.

The “Slide Away” singer took the stage during the music festival on Thursday, opting for a retro-inspired look to go along with her mullet haircut. The ensemble teamed a blue tee, reading “Roy Halston,” from brand Alled-Martinez along with coordinating blue and white short shorts.

When it came to footwear, Cyrus rounded out the retro moment in a set of silver go-go boots. Go-go boots were a hit shoe in the ’60s and ’70s with their lifted toes, patent, latex-like uppers and block heels. While you may not see them all over today’s runways, the style is still great for completing any throwback costume (from a go-go dancer to Britney Spears in “Oops…I Did It Again”) or adding bold flair to an everyday look.

The “Hannah Montana” alumna’s own pair came with a platform metallic silver twist, hitting just below the knee. The silhouette measures close to 5 inches in height and bears resemblance to similar silhouettes from Cyrus’ go-to brand, Gucci. A black iteration of the Madame boots from the Italian luxury house retail for almost $1,800 at Matches Fashion.

As for Cyrus herself, the singer is no stranger to a stir-causing style moment. While she is best known for her hit albums and box office films, the Disney Channel alumna also dips her toes in the fashion and shoe space. She even made an appearance on the runway at the Marc Jacobs’ fall ’20 show and has also sat front row at shows for top labels such as Tom Ford and Saint Laurent. The “Last Song” actress also has worked with Converse on a series of pride-filled shoe collections.

Try out a new bold footwear look in these boots inspired by Miley Cyrus.

Flip through the gallery to find more of Miley Cyrus’ style transformation over the years.