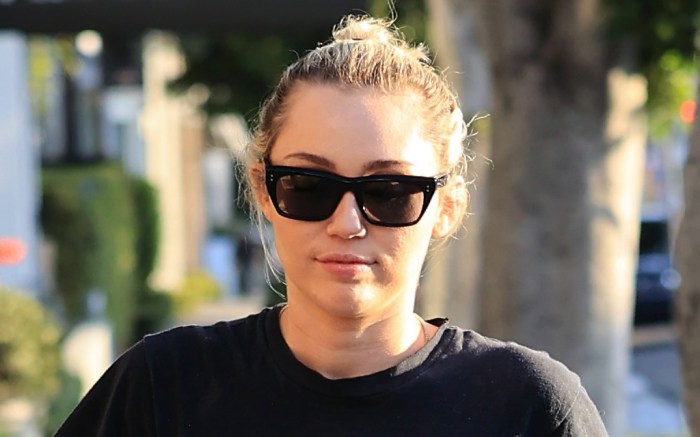 No matter where she goes, Miley Cyrus always brings flair and excitement.

Earlier this week, the “Hannah Montana” alumna hit the grocery store in style, dancing through the aisles in a casual twist on her usual edgy style as seen on TikTok. The outfit teamed a Metallica tuxedo-inspired T-shirt with white straight-leg jeans and a green trucker hat.

The finishing touch of the rockstar’s choice of attire came in the form of chunky combat boots; the lace-up silhouette featured leather-like uppers set atop a lifted platform sole with a lugged base.

Daft Punk directed this video. & that’s The Weeknd laughing in the background.No cap.

♬ I Feel It Coming – The Weeknd

Combat boots and hiking-inspired styles are the new norm amongst celebrity style trends, experiencing a revitalization along with a few other silhouettes from the 1990s. From brands like Prada along with Bottega Veneta and Dr. Martens, these lug-sole boots offer ease of wear with an edgy-chic appeal. This season, you’ll spot utilitarian boots on the likes of Kylie Jenner, Cara Delevingne, Gwen Stefani and more major stars.

Miley herself modeled a similar silhouette of combat boots when arriving in Miami for the Super Bowl back in February. Once again lacing up the chunky kicks, the “Plastic Hearts” singer matched the shoes to a white cropped tank and super baggy black trousers with a studded belt.

While Cyrus herself is best known for her hit albums and box office films, she also dips her toes in the fashion and shoe space. The former Disney Channel star made an appearance on the runway at the Marc Jacobs’ fall ’20 show and has also sat front row at shows for top labels such as Tom Ford and Saint Laurent. She also has worked with Converse on a series of pride-filled shoe collections.

Hop on the combat boot trend like Miley Cyrus in these chunky pairs inspired by her look.

Click through the gallery to check out more of Miley Cyrus’ boldest looks throughout her style evolution.