Miley Cyrus Is Just ‘One of the Boyz’ in a Muscle Tee, Ripped Jeans & Lil Nas X’s ‘Satan Shoes’ 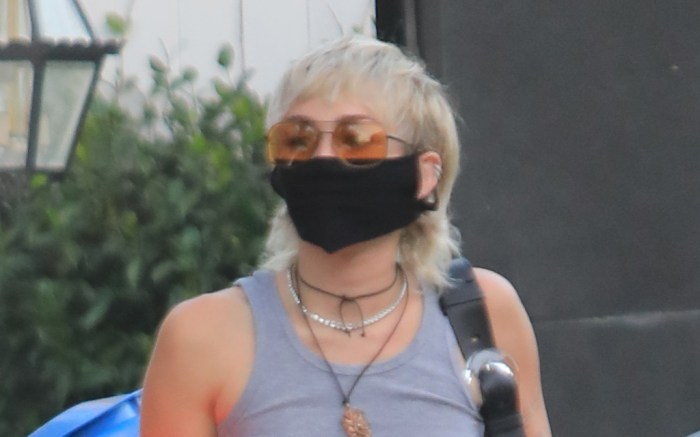 Miley Cyrus proved why she is just “one of the boyz” this weekend with a little help from Lil Nas X.

The “Plastic Hearts” singer channeled her southern roots as she posed atop an old car in a cutoff muscle tee matched with shredded baggy jeans; the outfit also included a backward trucker hat and a new set of sneakers.

Courtesy of her friend and fellow musician Lil Nas X, the shoes are a newly released design that have been causing quite the stir this week. The MSCHF x Lil Nas X “Satan Shoes” reimagine a classic Nike Air Max 97 silhouette with black uppers and red detailing, finished off with a symbolic charm.

On Friday, Saint, a sneaker and streetwear social media account, tweeted the initial campaign imagery for the shoe which released in part with Lil Nas X’s new music video for his song, “Montero (Call Me by Your Name).” The nature of the shoes, which reportedly release today, caused a frenzy across social media with a mix of proud supporters and vocal critics of the design’s bold nature — Saint states that it even includes “1 drop of human blood.”

While the sneaker appears to have been made in collaboration with Nike, the athletic powerhouse clarified that it had no part in the creation of the shoe. “We do not have a relationship with Little Nas X or MSCHF. Nike did not design or release these shoes and we do not endorse them,” a Nike spokesperson told FN on Sunday.

As for Miley Cyrus herself, the singer is no stranger to a stir-causing style moment. While she is best known for her hit albums and box office films, the “Hannah Montana” alumna also dips her toes in the fashion and shoe space. The former Disney Channel star made an appearance on the runway at the Marc Jacobs’ fall ’20 show and has also sat front row at shows for top labels such as Tom Ford and Saint Laurent. She also has worked with Converse on a series of pride-filled shoe collections.

While Lil Nas X’s sneakers may be hard to get your hands on, you can still channel Miley Cyrus in these similar Nike sneakers.

Click through the gallery to check out more of Miley Cyus’ wildest style moments throughout the decades.