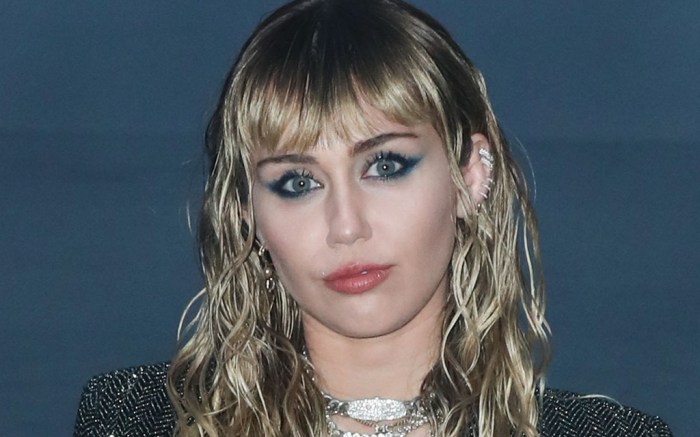 Miley Cyrus is strutting her stuff in wild style this week as she promotes her new merchandise.

In a twist on her own country roots, the “Plastic Hearts” musician rounded out her look with unexpected cowboy boots; the white calf-high pair included a lifted heel and a pointed toe finish.

Western boots experienced a revival amongst celebrity style trends in 2018, continuing now into 2021 with their classic appeal and retro touch. From pointed-toe versions to square-toe silhouettes, twists on cowgirl boots could be found on the likes of Gigi Hadid, Gwen Stefani and Hailey Baldwin with brands including Givenchy, Off-White, Anny Nord and more featuring the designs on their runways.

As for Cyrus herself, the cowboy boots this week are just another addition to her recent streak of bold looks. On Tuesday, for example, the “Hannah Montana” alumna spent the afternoon climbing all over dad Billy Ray Cyrus’ truck as she promoted her new merch. The singer herself posed atop the Nissan in a cutoff pink tee that reads “Miley Cyrus Made Me Realize I’m Gay” along with a few other risqué lines.

Turning the hot pink number into a full look, the “Plastic Hearts” musician then looped in a silver-buckled belt and a set of eye-catching designer heels. The gold strappy sandals come courtesy of Gucci, for whom Cyrus serves as an ambassador, and feature a mid-height block heel with metallic uppers; similar designs from the brand retail for $890 at Nordstrom.

As for Cyrus herself, the singer is no stranger to a stir-causing style moment. While she is best known for her hit albums and box office films, the “Wrecking Ball” musician also dips her toes in the fashion and shoe space. She even made an appearance on the runway at the Marc Jacobs’ fall ’20 show and has also sat front row at shows for top labels such as Tom Ford and Saint Laurent. The “LOL” actress also has worked with Converse on a series of pride-filled shoe collections.

Get in on the Western boot trend with these white pairs inspired by Miley Cyrus.

Flip through the gallery for even more of Miley Cyrus’ style evolution over the years.