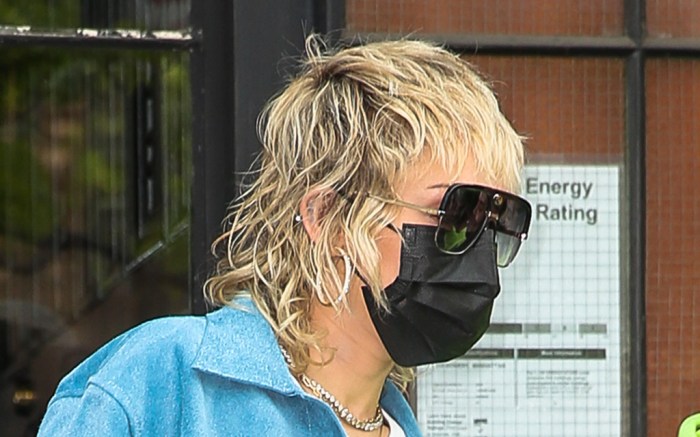 Miley Cyrus hung out with another wild music star this weekend in bold fashion.

Joining country musician Orville Peck on Sunday, the “Plastic Hearts” singer opted for yet another edgy moment for her outfit of the day. Her look including a “boyfriend”-style dress shirt tucked under a tie-inspired bustier from Moschino and black flare-hem trousers.

The top taps into this season’s newfound appreciation for corseted silhouettes and bustier designs, spotted on everyone from all the Kardashian-Jenner sisters to Beyoncé and Rosalía in the past few weeks alone.

To round out the look and protect her from the muddier outdoor setting, Cyrus broke out a pair of patent platform combat boots.

Combat boots and hiking-inspired styles are the new norm amongst celebrity style trends, experiencing a revitalization along with a few other silhouettes from the 1990s. From brands like Dr. Martens and Prada along with Bottega Veneta, these lug-sole boots offer ease of wear with an edgy-chic appeal. You’ll find the designs on top fashion figures including Gigi Hadid, Eva Longoria, Lil Nas X and more.

Cyrus herself loves a good combat boot silhouette. In March, the “Hannah Montana” alumna hit the grocery store in style, dancing through the aisles in a casual twist on her usual edgy style as seen on TikTok. The outfit teamed a Metallica tuxedo-inspired T-shirt with white straight-leg jeans and a green trucker hat.

The finishing touch of the rockstar’s choice of attire came in the form of chunky combat boots; the lace-up silhouette featured leather-like uppers set atop a lifted platform sole with a lugged base.

Daft Punk directed this video. & that’s The Weeknd laughing in the background.No cap.

♬ I Feel It Coming – The Weeknd

As for Cyrus herself, the singer is no stranger to a stir-causing style moment. While she is best known for her hit albums and box office films, the “Last Song” also dips her toes in the fashion and shoe space. She even made an appearance on the runway at the Marc Jacobs’ fall ’20 show and has also sat front row at shows for top labels such as Tom Ford and Saint Laurent. She also has worked with Converse on a series of pride-filled shoe collections.

Try out the combat boot trend for yourself in these lifted pairs.

Click through the gallery for more of Miley Cyrus’ top looks over the years.