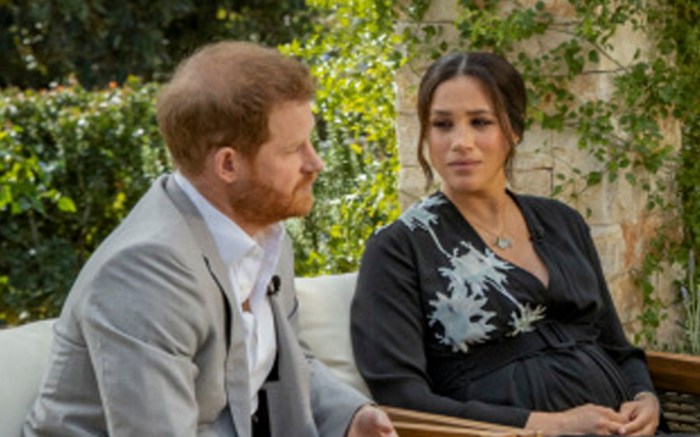 This Sunday, Meghan Markle and Prince Harry will join Oprah Winfrey for a two-hour special discussing their lives in the public eye and their worlds after leaving the royal bubble. The “Oprah with Meghan and Harry: A CBS Primetime Special” airs on Sunday, March 7, at 8 p.m. ET.

Previewing the event, CBS shared a first-look into the special production with a glimpse into the setup for the show. Prince Harry and his wife can be seen sitting with proper social distancing from Winfrey in a scenic outdoor garden. While the Duke of Sussex opted for a gray and white suit with suede oxfords, the Duchess models a silky black $4,700 Armani dress complete with a V-neck silhouette and a floral accent across the right shoulder.

The “Suits” actress, who is expecting her second child with Prince Harry, went for a bold footwear look to complete the monochrome appeal of her attire. Her shoes of choice came in the form of a classic pump set with a pointed-toe silhouette, rounded vamp and a towering stiletto heel that appeared to measure close to 5 inches in height. The suede design also included a contrasting peach outsole and a one-size-too-big fit — a move that Markle frequents to reduce friction and rubbing on her feet during wear. The style bears resemblance to Aquazzura’s Purist pumps, one of the Duchess’s favorite designs that retail for over $600 at Farfetch.

The former actress oftentimes dons sleek pumps from Aquazzura, Sarah Flint and Stuart Weitzman, but also owns a variety of casual styles from brands like Veja, Adidas and Rothy’s.


CBS also teased a glimpse into the special on Twitter last night, sharing the first video preview from the interview. “For me, I’m just really relieved and happy to be sitting here talking to you with my wife by my side,” said Prince Harry as he held tight to his spouse’s hand. “Because I can’t begin to imagine what it must have been like for her going through this process by herself all those years ago because it’s been unbelievably tough for the two of us but at least we had each other,” the duke added in reference to his mother, Princess Diana.

CBS Presents Oprah with Meghan and Harry: A Primetime Special in one week. #OprahMeghanHarry pic.twitter.com/WCyoHDMCaP

Click through the gallery to find more of Meghan Markle’s top footwear moments over the years.