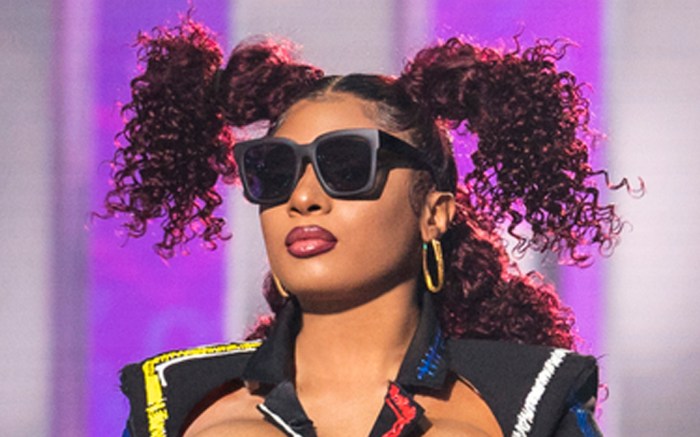 The rapper, who serves as a judge for the television series, took the stage on last night’s episode in a Basquiat-inspired suit. With styling help from Brookelyn Styles, the custom piece came courtesy of designer Bryan Hearns and channeled the famous artist’s work with a bustier-style blazer and sketch-coated pants; the outfit also included coordinating pumps with similar detailing.

HBO Max’s “Legendary” premiered on the platform in May 2020; the series is a voguing competition inspired by the underground ballroom community. With members from different “houses” competing for a $100,000 prize, Megan The Stallion serves as a judge for the battles along with actress Jameela Jamil, celebrity stylist Law Roach and dancer Leiomy Maldonado, also known as the “Wonder Woman of Vogue.”

In another look for last week’s episode, the “Savage” musician modeled a semi-sheer catsuit in a devil-inspired look. The red glittering piece tapped Venus Prototype for a custom design with marching lace-up boots to tout.

While her music career is launching off the charts, Megan Thee Stallion also racked up a series of high-profile deals in the fashion industry. She previously starred in Puma’s campaign to promote its Cali Sport sneaker back in November 2019 as well as inked a deal with Fashion Nova for spring ’20; the 5-foot-10 star’s capsule offers jeans for taller frames. Additionally, the rapper made an appearance in Rihanna’s Savage x Fenty lingerie brand’s summer ’20 campaign and Coach’s spring ’21 presentation.

Click through the gallery for more of Megan Thee Stallion’s wildest looks over the years.