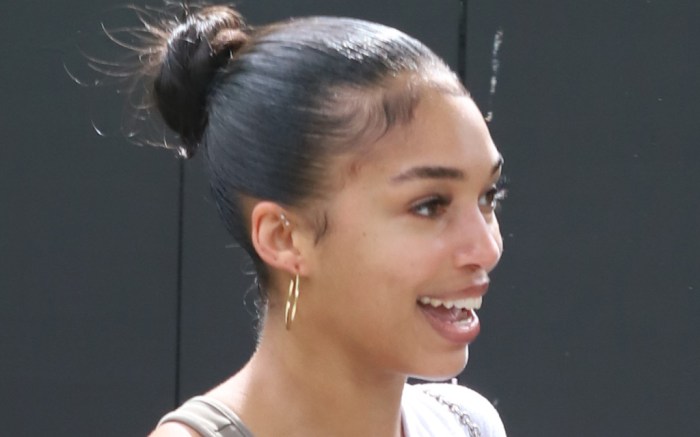 Lori Harvey is giving her twist on this season’s most daring trend in a retro-chic way.

The model took to Instagram to show off her new dress, modeling a $130 bodycon number courtesy of Amy Shehab; the long-sleeve design recently debuted from the brand and features a mind-bending print contrasted by a front cutout with ring closures.

Amongst a revitalization of 1990s and early 2000s silhouettes, cutout tops, pants and dresses are making a triumphant return to the celebrity style scene this season. From Cult Gaia’s beloved twisted dress to Monôt’s peek-a-boo designs, you can find the skin-baring numbers on everyone from Zendaya to Dua Lipa and practically every member of the Kardashian-Jenner family.

In another trending element, Harvey herself completed her ensemble in a pair of sleek sandals. The chic camel brown heels came with a strappy design and a rounded toe; favored by Kristin Cavallari, Lizzo, Cardi B and more, ankle-wrap heels are all the rage this summer with heels that snake across the ankle and calf for a standout punch and a supported fit.

As for Lori Harvey, the media personality is no stranger to a wrapping sandal and even favorited a leather twist on the silhouette for beau Michael B. Jordan’s 34th birthday in February.

The 24-year-old took to Instagram to shout out her beau’s big day, sharing images of them together in coordinating all-black looks. Harvey’s own ensemble featured a cross-front, backless dress formed with a liquid leather finish from Saint Laurent; while the bold midi-length design isn’t currently available, similar silhouettes sell for over $4,500 at Farfetch.

The sleek leather appeal of her ensemble continued down into the influencer’s choice of footwear, recognizable from the shoe’s bold red sole. Her Christian Louboutin sandals highlighted a strappy design that wrapped the foot and ankle in glossy uppers while balanced atop a 4-inch metallic stiletto heel. Titled the Epic Rose silhouette, Harvey’s sandals retail for $1,195 at Matches Fashion.

As for Lori Harvey herself, while bold looks are also a part of her typical style rotation, sweatpants are actually a more common staple in the model’s closet. Throughout 2020, the daughter of Steve Harvey continued to debut chic takes on the comfortable silhouette, upgrading cozy pants with designer tank tops, chunky footwear and trending accessories. She even recently partnered with Naked Wardrobe for her own capsule of stylish comfort wear.

In addition to her new collection, the model also serves as an ambassador for Pretty Little Thing and has previously partnered with Sephora and Dolce & Gabbana for a series of advertisements and campaigns.

Flip through the gallery for more of Lori Harvey’s boldest looks over the years.