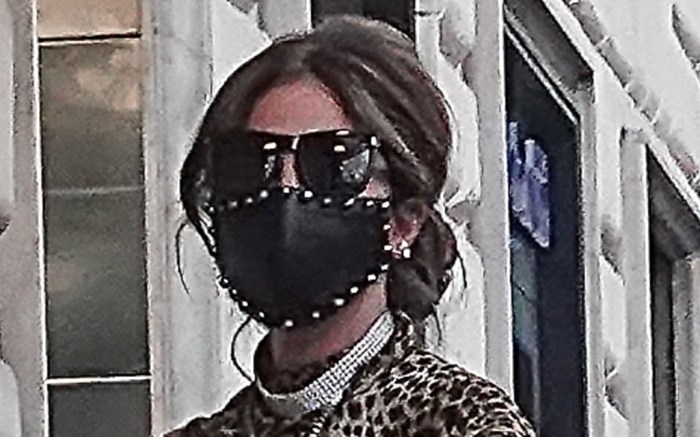 Lady Gaga gave fans the first look into her on-screen attire as she got into character for her new film, “Gucci.”

The singer-turned-actress is set to star in Ridley Scott’s new movie depicting the Gucci family dynasty and the murder of Maurizio Gucci, the grandson of the brand’s founder, Guccio Gucci. Gaga will play Maurizio’s ex-wife Patrizia Reggiani, who was found guilty of orchestrating her ex-husband’s assassination in 1995.

And yesterday, in Rome, the “Bad Romance” musician was spotted in her on-set attire while arriving at her hotel. The outfit teamed a vintage-inspired, one-shoulder leopard print dress with glittering jewels and a protective leather face mask between takes.

As for footwear, Lady Gaga continued the classic retro Italian style moment as she braced the cobblestone streets in teetering heels. The sleek pumps included a pointed-toe design accented by a rounded vamp and a towering stiletto heel that appeared to measure close to 5 inches in height.

As for her role, Maurizio left Reggiani after 12 years for a younger woman, sparking her motivation, among other reasons, for his murder; she served 18 years in prison and was released in 2016, earning her the infamous nickname Black Widow. The script will be based on Sara Gay Forden’s book “The House of Gucci: A Sensational Story of Murder, Madness, Glamour and Greed.”

As for Lady Gaga herself, when it comes to shoes, the taller the better may as well be Lady Gaga’s motto; the “Rain On Me” singer’s go-to designers for everything footwear include Pleaser Shoes, of course, Demonia, Cecilio Castrillo and Versace amongst other labels providing custom pairs.

Click through the gallery to find even more of Lady Gaga’s boldest looks over the years.