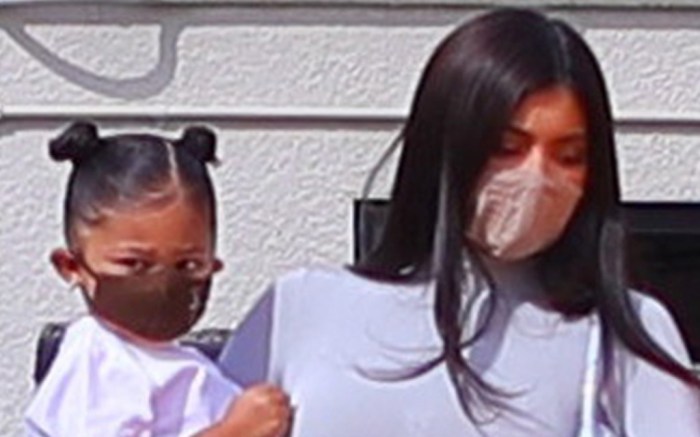 The beauty mogul joined her sister Khloe Kardashian for her and Tristan Thompson’s daughter’s birthday celebrations on Monday. Bringing along her own daughter Stormi Webster, Kylie went chic for the occasion in a torso-wrapping crop top matched to ’90s-chic baggy leather pants.

Leather attire has become one of the biggest trends this winter — and now this spring, too. Whether in the form of a jacket, skirt or, in Kylie’s case, pants, the effortlessly cool material offers an easy way to add a glam yet edgy touch to all looks, as exemplified by the likes of Katie Holmes, Kendall Jenner, Zoe Kravitz and more.

To complete her edgy ensemble, Kylie tapped a beloved collaboration between Nike and Off-White. The all-white pair bears resemblance to a rare collaborative Air Force 1 sneaker that exclusively debuted at ComplexCon in 2017 in honor of the silhouette’s 35th anniversary. The low-top style boasts a metallic Swoosh design laid over white leather uppers and a chunky foam tongue.

Equipped with designer Virgil Abloh’s signature hangtag and orange tab, the Off-White x Nike Air Force 1 retailed originally for $150 but now resells for anywhere from $5,100 to $10,000 on resale sites such as StockX and GOAT.

When it comes to footwear and shoes, Kylie has an impressive history specifically in the sneaker industry. Before she was a beauty mogul, the Kylie Cosmetics founder held multiple gigs in the sneaker world. She formerly served as a brand ambassador for Puma before joining forces with Adidas in August 2018, exclusively wearing Three Stripes styles in campaigns and across social media.

Flip through the gallery to find more of Kylie Jenner’s statement looks over the years.