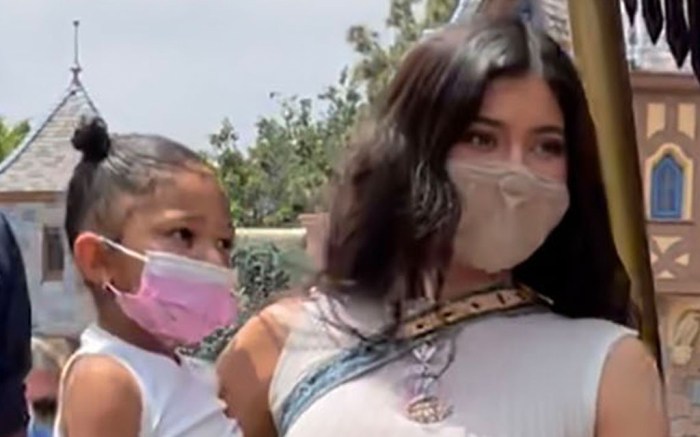 Kylie Jenner and Travis Scott gave their daughter a day she’ll never forget with a trip to Disneyland in Florida this week.

Joined by Rob Kardashian’s 4-year-old daughter Dream, Kylie and Travis explored the theme park alongside their 3-year-old daughter Stormi Webster. For the outing, Kylie went casual-chic in high-rise, tie-dye jeans and an “It” girl cropped top.

The trend comes in the form of a classic white crop top typically matched to a bold pant or statement short; fans of the style include Kendall Jenner, Alessandra Ambrosio, Lori Harvey and more who have modeled similar tops in the past few weeks alone.


On her feet, Kylie decided to match her “Astroworld” counterpart in footwear from his own collaboration. The Travis Scott x Air Jordan 6 Retro “British Khaki” design dropped just last month as the latest buzzy installment between the rapper and Jordan Brand. The new silhouette is recognizable for its brown suede uppers, hints of burnt red detailing and a glow-in-the-dark outsole. In a unique twist, the sneaker also includes two stash pockets across the collar for handy storage.

Originally retailing for $250 at time of release, the sneaker now resells for upwards of $355 to $950 at StockX.


When it comes to footwear, Kylie Jenner herself has an impressive history specifically in the sneaker industry. Before she was a beauty mogul, the reality television personality held multiple gigs in the sneaker world. She formerly served as a brand ambassador for Puma before joining forces with Adidas in August 2018, exclusively wearing Three Stripes styles in campaigns and across social media.

While Kylie Jenner’s sneakers come with a high resale price, you can still achieve her chic style in these suede sneakers,

Flip through the gallery for more of Kylie Jenner’s edgiest looks over the years.