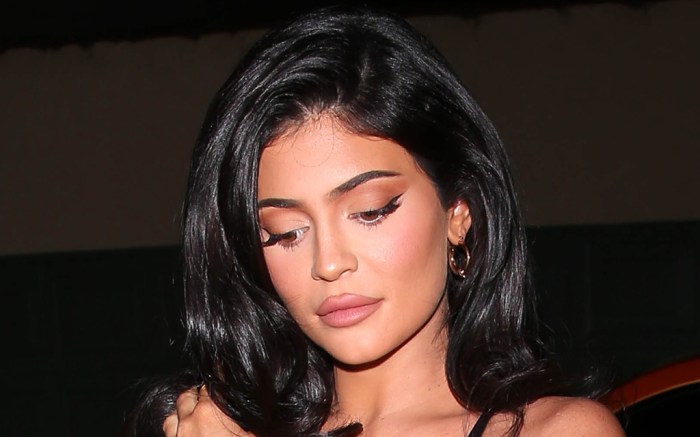 Kylie Jenner is prepping for Halloween with a brand new Kylie Cosmetics collection.

Promoting the upcoming “A Nightmare on Elm Street” collaboration, the media personality continued to pay homage to the horror film series in another statement look. Yesterday’s outfit included a white high-neck bodysuit — resembling a design from her sister Kim Kardashian’s Skims line — and an unmissable pair of boots. The lipstick-colored pair featured a pointed toe and slick patent uppers, all atop an ultra-thin stiletto heel.

From leather twists on the trend to edgy lace-up styles, you can find knee-high boots on everyone from Ciara to Lily Collins and Gwen Stefani amongst other major names. In colder temperatures, the silhouettes offer coverage to counter skirts, dresses and shorts as well as provides an extra layer to any leggings or jeans look.

On Tuesday, the beauty mogul announced the news of her upcoming collab, tackling the theme of the collection with ease in a very Kardashian twist on a Freddy Kruger-inspired costume.

The ensemble highlighted a full-sleeved catsuit that echoes Krueger’s recognizable scarring from the film series. The bloody Venus Prototype design came balanced as well with matching platform heels, camouflaged in the same print with an over 5-inch lift. For a final touch, Kylie even paid homage to the character’s signature bladed hands with her choice of nail art.

Make your outfit pop in these red boots inspired by Kylie Jenner.

Flip through the gallery to see Kylie Jenner’s wild style over the years.