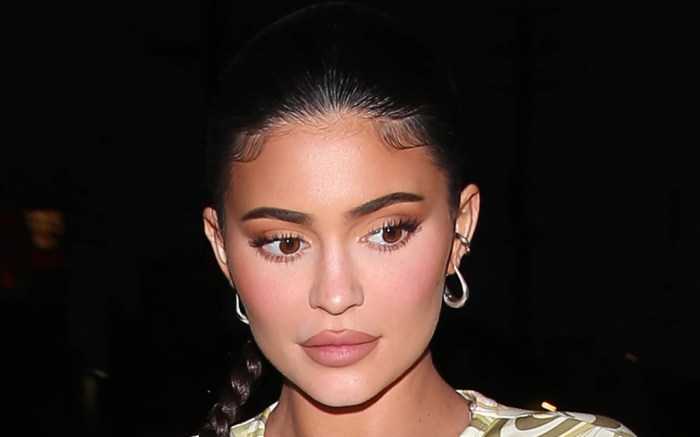 The beauty mogul stepped out on Wednesday night in bold fashion, opting for a bodycon maxi-length dress with a long-sleeve finish; the number also came coated in a mind-bending, optical illusion-like print in shades of white, yellow and brown.


As if her look wasn’t edgy enough, the Kylie Cosmetics founder tapped one of her favorite brands: Amina Muaddi, a beloved footwear label known for its signature flare-heels and effortlessly bold designs. From winning the 2019 FNAA for Designer of the Year to a recent series of hit collaborations with Rihanna’s Fenty line, Muaddi designs have been spotted on the likes of everyone from Kim Kardashian to Hailey Baldwin even to Rihanna herself.

Kylie’s silhouette in particular this week is a new design from the Jordanian and Romanian footwear creator. Titled the Pernille boot, the sleek silhouette comes set atop a camouflaged white wedge heel with an elongated pointed toe and a 4.5-inch lift. You can shop the statement style for over $1,000 at MyTheresa.

When it comes to footwear, Kylie herself has an impressive history specifically in the sneaker industry. Before she was a beauty mogul, the reality television personality held multiple gigs in the sneaker world. She formerly served as a brand ambassador for Puma before joining forces with Adidas in August 2018, exclusively wearing Three Stripes styles in campaigns and across social media.

While Kylie Jenner’s designer boot silhouette is one of a kind, you can still go glam like the beauty mogul in these sleek white boots.

Click through the gallery to discover even more of Kylie Jenner’s standout looks throughout the years.