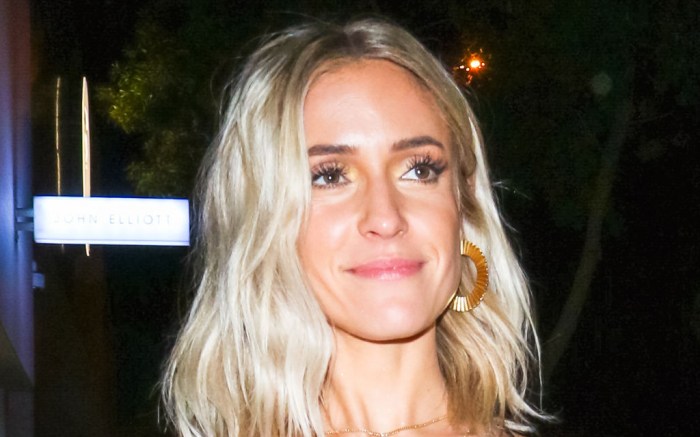 Kristin Cavallari served up major summer style inspiration this week during her trip to Cabo, Mexico.

The “Laguna Beach” star unveiled her beachy attire on Instagram yesterday, posing next to a decorated art piece with the joking caption: “Date night.”

For the evening, the media personality went glam in a spaghetti strap dress complete with black cotton gauze fabric and delicate lace trims; the design comes courtesy of Charo Ruiz with a $540 price tag at Intermix.

To continue the streamlined appeal of her ensemble, Cavallari then laced up a trending set of ankle-wrap sandals. The black pair featured a square-toe base with a strappy appeal, all set atop a mid-height heel.

Thong-toe footwear returned to the celebrity scene last year as one of spring and summer’s biggest trends and is already sticking around for 2021. Be it classic flip-flops or thong-toe heels, the minimalistic silhouette falls in line with a ’90s-inspired revitalization of fashion, as seen with shoes like square-toe styles and pops of neon color. Stars like Alessandra Ambrosio, Meryl Streep and the entire Kardashian-Jenner clan amongst other major names continue to support the trend in all seasons.

Ankle-wrap heels are also a major hit for this summer and another favorite silhouette for Cavallari herself.

When it comes to dressier footwear, though, the 34-year-old star usually prefers teetering stilettos in a mix of silhouettes and colors for her formal occasions — she told FN in 2017 it’s “always” heels over flats. Her collection, highlighting styles from likes of Gianvito Rossi, Prada and Mia Becar could be seen in her former TV series “Very Cavallari.” For street style looks, Cavallari switches it up with Converse, Dr. Martens, Vionic and Sorel’s more casual footwear.

Flip through the gallery for more of Kristin Cavallari’s chic style over the years.