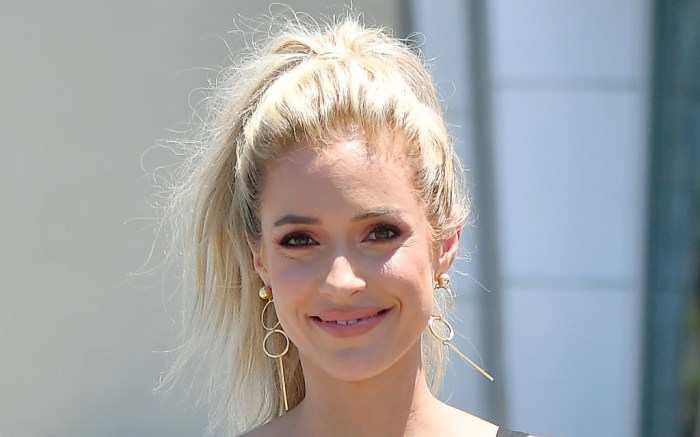 Kristin Cavallari gave fans a look into her morning routine this week and it’s the best way to start the day.

The reality television personality showed off her scenic bike route yesterday in workout-ready attire, matching a scooped brown sports bra to soft gray leggings. To prep for her ride, Cavallari also broke out a pair of two-tone sneakers in a colorway favorited by first lady Jill Biden herself.

Coming from Swiss running brand On, the On Cloudflow features adaptive engineered mesh uppers for breathability and support along with a unique speedboard with a responsive flex and rocker to allow for full propulsion during strides. A signature CloudTec outsole includes 18 individual pods to push your step forward and provide a cushion for shock absorption. The media personality’s choice of colorway comes with ombré black to gray uppers on top of a split-tone pink and white outsole.

The style retails for $140 and is available in a mix of shades at Zappos.com.

First Lady Jill Biden has previously modeled the same pair of sneakers for her more casual and athletic outings. In January, for example, Dr. Biden welcomed their dogs Champ and Major to the White House, marking the return of dogs in the presidential residences for the first time since President Barack Obama’s last term. After the two dogs explored the grounds, Jill brought them back inside and showed off her chic off-duty ensemble along the way.

For the outing, the educator kept warm in a midi-length black coat worn with her go-to sneakers.

A post shared by Champ and Major Biden 🇺🇸🐶🐶 (@champandmajorbidennofficial)

When it comes to dressier footwear, Kristin Cavallari herself usually prefers teetering stilettos in a mix of silhouettes and colors for her formal occasions — she told FN in 2017 it’s “always” heels over flats. Her collection, highlighting styles from likes of Gianvito Rossi, Prada and Mia Becar could be seen in her former TV series “Very Cavallari.” For street style looks, Cavallari switches it up with Converse, Dr. Martens, Vionic and Sorel’s more casual footwear.

Beyond both red carpet looks and her off-duty trends, the media personality also has longtime ties to the footwear and fashion industries. She became a brand ambassador for Chinese Laundry in 2012 and designed her own collection with the brand for several years. She also founded her own accessories brand Uncommon James in 2017, with jewelry retailing for under $75, and has her Little James Clothing line for children.

Try out a pair of On Running shoes for yourself in these similar pairs.

Click through the gallery to check out more of Kristin Cavallari’s glam taste over the years.