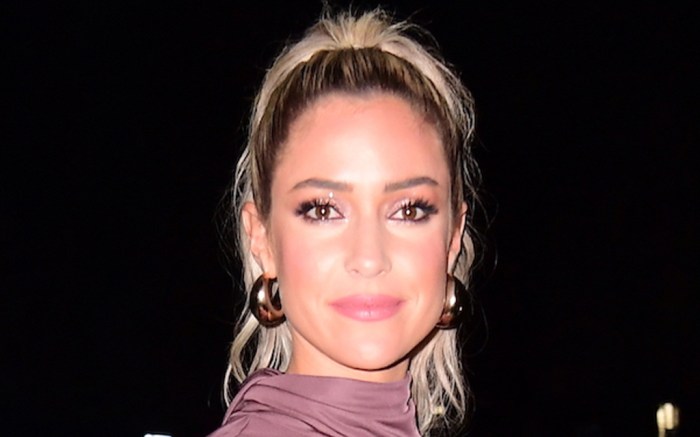 Kristin Cavallari may have found the outfit of the summer during a stop in Charleston this weekend.

The “Laguna Beach” alumna joined a few friends for a stop by Leon’s Oyster Shop in the South Carolina coastal town on Sunday. To brace for summery weather, Cavallari went chic in a white halter-neck minidress and patterned sneakers.

Matching sneakers to dresses is a major trend for this summer as celebrities and fashion fans alike transition slowly back into more glam attire. The casualness of a sneaker finds the perfect balance between dressed-up and relaxed styling for those who aren’t quite ready to break out their heels and sandals yet.

Cavallari’s own pair bears resemblance to designs from Golden Goose. Golden Goose is a mainstay in casual footwear, offering a more upscale, glam twist on sneakers and is a favorite of Alessandra Ambrosio, Hilary Duff and Megan Fox amongst other stars. Similar designs to Cavallari’s pick retail for $560 at Net-a-Porter.

When she isn’t pairing her dresses with sneakers, the media personality also loves a good cowboy boot. Western boots experienced a revival amongst celebrity style trends in 2018, continuing now into 2021 with their classic appeal and retro touch. From pointed-toe versions to square-toe silhouettes, twists on cowgirl boots could be found on the likes of Gigi Hadid, Gwen Stefani and Hailey Baldwin with brands including Givenchy, Off-White, Anny Nord and more featuring the designs on their runway.

When it comes to dressier footwear, though, the 34-year-old star usually prefers teetering stilettos in a mix of silhouettes and colors for her formal occasions — she told FN in 2017 it’s “always” heels over flats. Her collection, highlighting styles from likes of Gianvito Rossi, Prada and Mia Becar could be seen in her former TV series “Very Cavallari.” For street style looks, Cavallari switches it up with Converse, Dr. Martens, Vionic and Sorel’s more casual footwear.

Give your dress a cool touch in these sneakers inspired by Kristin Cavallari.

Click through the gallery for more of Kristin Cavallari’s glam looks over the years.