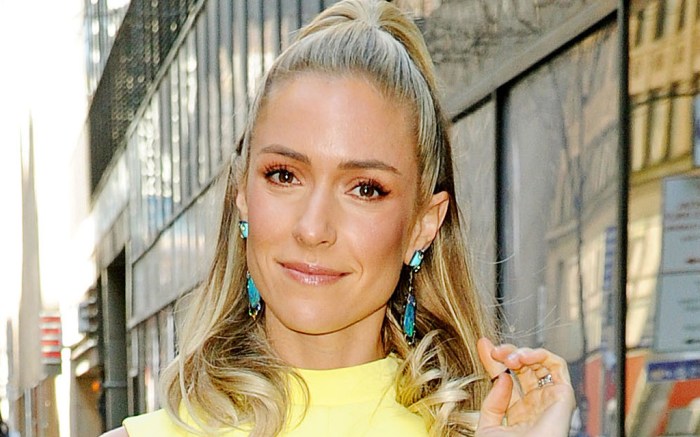 Kristin Cavallari has made her stance final: skinny jeans are out.

The media personality took to Instagram last night to issue her official statement on the 2000s-chic pant trend, hopping on the Gen-Z wave of straight-leg and wide-leg pants. For the post, Cavallari modeled a risky tied-together crop top and paper-bag chino pants to prove her point.

The choice of skinny jeans has become an argued move as per Gen-Z tastes who have taken to TikTok in recent weeks to express their thoughts on the silhouette along with side parts and more millennial trends.

To give her own outfit one last on-trend push, Cavallari opted for PVC mules when it came to footwear. The pointy heels feature a see-through strap with a peep-toe opening and a stiletto lift.

PVC footwear rose to prominence in 2018 and has since become a staple on the celebrity style scene. Brands like Gianvito Rossi, Christian Louboutin and Givenchy have jumped on the clear shoe train with bold heels and studded designs that flatter the foot and elongate the legs. In addition to stars like Xtina, J-Lo and Cardi B, the Kardashian-Jenner sisters as a whole are huge fans of the trend.

When it comes to dressier footwear, though, the reality television star usually prefers teetering stilettos in a mix of silhouettes and colors for her formal occasions — she told FN in 2017 it’s “always” heels over flats. Her collection, highlighting styles from likes of Gianvito Rossi, Prada and Mia Becar could be seen in her former TV series “Very Cavallari.” For street style looks, Cavallari switches it up with Converse, Dr. Martens, Vionic and Sorel’s more casual footwear.

Beyond both red carpet looks and her off-duty trends, the “Laguna Beach” alumna also has longtime ties to the footwear and fashion industries. She became a brand ambassador for Chinese Laundry in 2012 and designed her own collection with the brand for several years. She also founded her own accessories brand Uncommon James in 2017, with jewelry retailing for under $75, and has her Little James Clothing line for children.

Click through the gallery for even more of Kristin Cavallari’s memorable outfits over the years.