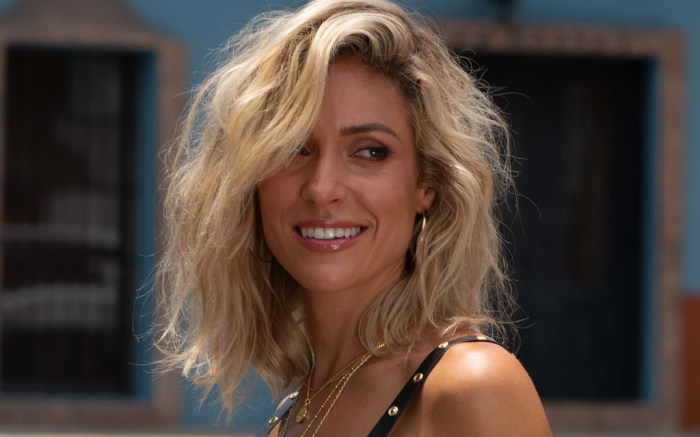 Kristin Cavallari served up major summer style inspiration this week as she debuted new pieces from her Uncommon James brand.

The media personality helped announce her jewelry line’s first summer ’20 drop this afternoon, taking the new designs on a waterside exploration in style. Manning the boat, Cavallari herself modeled earrings, necklaces and even a special anklet to accent her camel string bikini and white coverup top.

Anklets became a must-have accessory throughout the 1990s and have since experienced a revival in tandem with a revitalization of major ’90s style trends, including square-toe footwear, mom jeans and platforms. In 2020, anklets served as an easy way to add glitz to an ensemble, even while going barefoot in the comfort of one’s own home. You can find them on stars near and far including Vanessa Hudgens, Saweetie, Kylie Jenner and, of course, Rita Ora.

In another shot for the new collection, Cavallari herself showed off more trending accessories as she layered a chunky vintage-chic sweater over a white swimsuit again by the water.

Earlier this week, the “Laguna Beach” alumna showed off her sweet style on Instagram in a different way, getting in a breath of fresh air upon acres of green grass. For the trip to Franklin, Tenn., Cavallari tapped Zimmermann in tie-sleeve tiered dress complete with a billowing skirt and floral coating; similar colorways of the spring ’21 Mae silhouette from the brand retail for $650 courtesy of Saks Fifth Avenue.

When it comes to dressier footwear, though, the 34-year-old star usually prefers teetering stilettos in a mix of silhouettes and colors for her formal occasions — she told FN in 2017 it’s “always” heels over flats. Her collection, highlighting styles from likes of Gianvito Rossi, Prada and Mia Becar could be seen in her former TV series “Very Cavallari.” For more street style looks, Cavallari switches it up and taps Converse, Dr. Martens and Sorel in more casual footwear.

Beyond both red carpet looks and her off-duty trends, the television personality also has longtime ties to the footwear and fashion industries. She became a brand ambassador for Chinese Laundry in 2012 and designed her own collection with the brand for several years. She also founded her own accessories brand Uncommon James in 2017, with jewelry retailing for under $75, and has her Little James Clothing line for children.

Click through the gallery to find more of Kristin Cavallari’s standout style over the years.