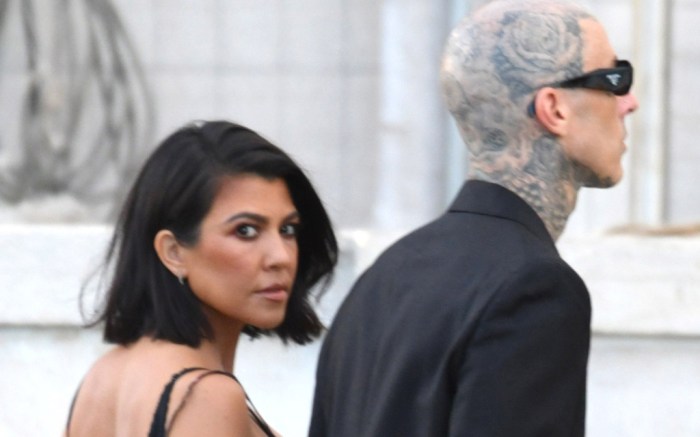 Kourtney Kardashian isn’t holding back anymore when it comes to her bold style.

The Poosh founder brought her risk-taking taste to Venice, Italy, this week for a busy schedule of Dolce & Gabbana events alongside beau Travis Barker. As seen on her Instagram last night, Kourtney got daring in one particular sheer dress from the Italian luxury house. The silky slip dress featured a statement print, layering over a black lace bralette and coordinating bottoms.

Slip dresses, like low-rise jeans and bandana tops, are making their triumphant return from the late 1990s and early aughts; the effortlessly chic silhouette is favorited this year already by Rihanna, Kendall Jenner and more top stars.

On her feet, the media personality broke out another major trend for the season: PVC heels. PVC footwear rose to prominence in 2018 and has since become a staple on the celebrity style scene. Brands like Gianvito Rossi, Christian Louboutin and Givenchy have jumped on the clear shoe train with bold heels and studded designs that flatter the foot and elongate the legs.

As for Kourtney herself, the reality television star broke out another bold trend during her time in Italy. The media personality explored the city on Sunday with beau Travis Barker in punk-chic attire. While Barker had on Enfants Riches Déprimés pants, Kourtney’s own look included an open-front black cardigan layered with an exposed bustier bralette and a red brocade skirt.

The unique skirt included black structural elements and a lace-up corseted fit, tapping into this season’s newfound appreciation for corseted silhouettes and bustier designs, spotted on everyone from Kourtney’s sister Kim Kardashian to Beyoncé and Megan Fox in the past few weeks alone.

Kourtney’s own sleek heels this week are just one of the many chic designs in the television personality’s footwear collection; her more dressed-up ensembles tend to include shoes from Balenciaga, Celine, Giuseppe Zanotti and, of course, Kanye West’s Yeezy line. In addition to her Yeezy pairs, Kourtney also favors sneakers from Veja for her workouts and from New Balance for her off-duty style..

Try out the PVC footwear trend for yourself in these see-through heels.

Click through the gallery for a look at Kourtney Kardashian’s risk-taking style over the years.