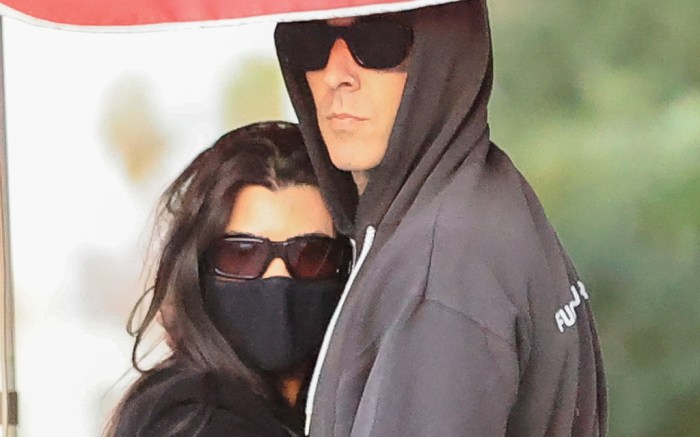 The new couple left the restaurant in relaxed attire on Tuesday, with the Blink 182 drummer opting for a hoodie and sweats and the Poosh founder deciding on a black bomber jacket, coordinating tee and comfy leggings.


To continue the easygoing appeal of his ensemble, Barker’s look came complete with a set of $70 low-top black Vans sneakers. Kourtney followed suit in black footwear with her Prada boots; the lug-sole boots feature a chunky base contrasted by mixed material uppers and a combat boot-inspired lace-up silhouette.

Originally coming with an added pouch for a unique touch, the stacked pair can still be found for $1,350 online at Saks Fifth Avenue.


The lugged boots are part of Kourtney’s regular footwear rotation, oftentimes sporting them in off-duty attire. In November 2020, for example, the media personality headed out for a shopping spree and a smoothie run with fried Fai Khadra in Los Angeles and opted for a chic look for the outing. As the LA version of winter starts to settle in, Kourtney stayed cozy as she turned an oversize corduroy shirt into a chic dress with a little help from legwear; the opaque tights act as coverage to balance out the shorter hem of her top, providing a versatile way to style pieces in your closet this season.

As for Kourtney herself, the sleek boots are just one of the many chic designs in the television personality footwear collection; her more dressed-up ensembles tend to include shoes from Balenciaga, Prada, Celine, Giuseppe Zanotti and, of course, her brother-in-law Kanye West’s Yeezy line. In addition to her Yeezy pairs, the “Keeping Up With the Kardashians” star also favors sneakers from Veja for her workouts and from New Balance for her off-duty style.

Beyond fashion, the media mogul also created her own lifestyle brand Poosh in 2019, offering health tips, products to shop and a mix of stories online.

Hop on the combat boot trend like Kourtney Kardashian in these chunky pairs inspired by her look.

Click through the gallery to find more of Kourtney Kardashian’s boldest looks over the years.