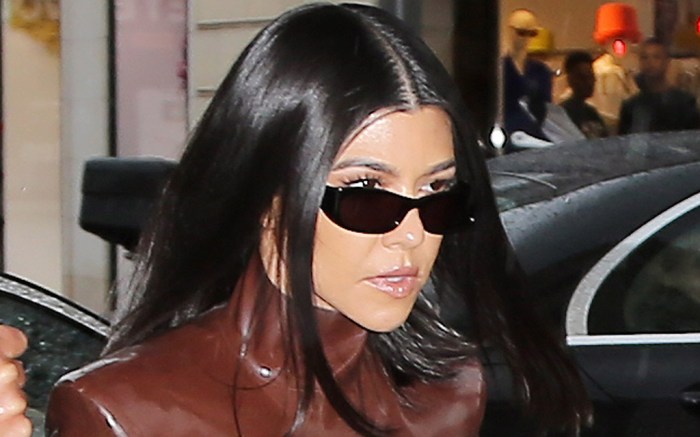 Kourtney Kardashian broke out one of this season’s most daring styles just in time for summer.

The Poosh founder shared hacks to turn a walk into a workout in the most daring way yesterday, strutting down the sidewalk in a semi-sheer black lace corset and layered wrap skirt.

The corset taps into this season’s newfound appreciation for corseted silhouettes and bustier designs, spotted on everyone from Kourtney’s sisters Kim Kardashian and Kylie Jenner to  Beyoncé and Rosalía in the past few weeks alone.

The finishing touch for Kourtney’s statement style came in the form of knee-high boots; the sleek brown leather pair came with a croc-embossed upper, pointed toe and lifted heel.

The media personality herself is a major fan of the elevated silhouette and has frequented the style often in the past. At the end of 2020, for example, Kourtney announced that she is joining in on the remake of Freddie Prinze Jr.’s 1999 hit movie “She’s All That” titled reversely “He’s All That.”

To share the news of her new role, the Poosh founder took to Instagram with a shot of herself lounging about reading the script. For her version of loungewear, Kourtney modeled a three-piece look combining a blazer with a suede wrap and a leather mini skirt atop heeled thigh-high boots.

The Prada boots are just one of the many chic designs in the television personality‘s footwear rotation; her more dressed-up ensembles tend to include shoes from Balenciaga, Bottega Veneta, Giuseppe Zanotti and, of course, her brother-in-law Kanye West’s Yeezy line. In addition to her Yeezy pairs, the “Keeping Up With the Kardashians” star also favors sneakers from Veja for her workouts and from New Balance for her off-duty style.

Beyond fashion, the media mogul created her own lifestyle brand Poosh in 2019, offering health tips, products to shop and a mix of stories online.

Flip through the gallery for more of Kourtney Kardashian’s best shoe styles over the years.