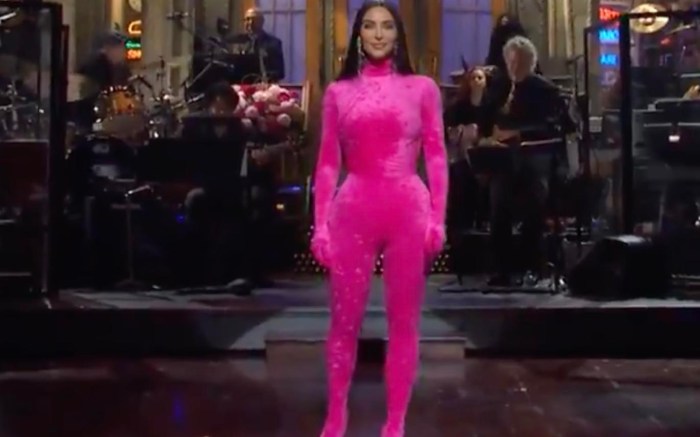 Kim Kardashian hosted “Saturday Night Live” for the first time ever today and her performance did not disappoint.

The reality television star took the stage in head-to-toe pink velvet, featuring a high neck and pumps. In her opening monologue, Kardashian poked fun at her family, Kanye West and more.

Earlier in the day she was spotted in a puffy pink coat and glitter boots on her way to NBC studios. Before hosting this weekend’s episode, the media mogul headed to rehearsals on Wednesday in eye-catching, all-black attire. The ensemble played with the balance of proportions, kicking off with her new go-to latex shirt and coordinating leather pants. Next came a dramatically oversize vest from the Paris-based luxury house; the design included a puffer-style silhouette with cutoff sleeves and an attached leather skirt.

Holding tight to a larger-than-life piece of luggage, Kim rounded out her look with another leather element, this time in the form of thigh-high boots.

Leading up to the Met Gala this year, Kim began putting her bold dresses and pants on the shelves and instead tapped Balenciaga and its creative director Demna Gvasalia for a series of almost camouflaging looks created with the same skin-tight fabric.

The media personality also headed to rehearsals in New York on Tuesday, stepping out of her hotel in a twist on her new signature style. The look, of course, came from Balenciaga and featured a full black ensemble formed from a draped robe top with latex tights and gloves.

Kim’s look came complete with a pair of sleek streamlined boots. Titled the Balenciaga’s Knife boots, the signature silhouette from the French brand features an elongated pointed toe, sock-style fit and a unique boxed heel counter. The style also comes set atop a 3.25-inch heel with similar pairs retailing for $950 at MyTheresa.

When it comes to her personal style, Kim’s outfit this week is just a few of many wild combinations in the television personality‘s closet. Despite the recent news of their filing for divorce, Kim still favors Kanye West’s Yeezy collections for footwear and apparel as well, in addition to sneakers and boots from his Adidas Yeezy line. She styles the pieces with coordinating looks from every hit brand you can think of — the list usually includes Balmain, Balenciaga, Amina Muaddi, Maison Margiela and Bottega Veneta.

In addition to stylish looks on and off the set of “Keeping Up With the Kardashians,” Kim also dipped her toes into the fashion and beauty world with a mix of ventures. She created her Skims shapewear line in 2019, featuring a mix of inclusive designs and now affordable face masks too. Additionally, the television star also founded her own makeup line, KKW Beauty, in the fall of 2019.

Check out the gallery for more of Kim Kardashian’s risk-taking style over the years.