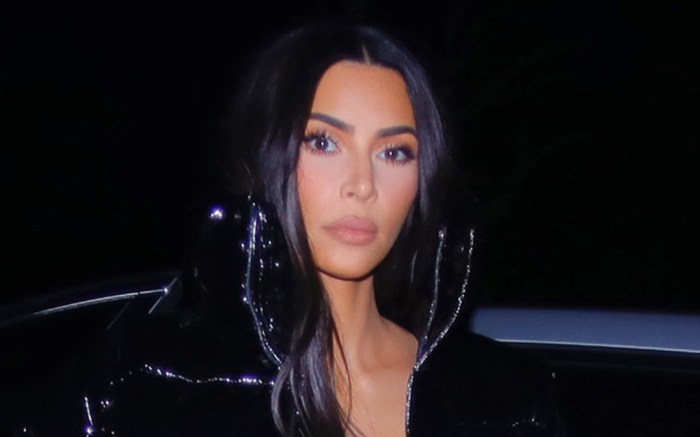 Kim Kardashian continued her steak of bold attire as she joined a friend for a Los Angeles outing before the weekend.

Stepping out on Thursday night, the media personality opted for an on-trend layered look that teamed a vinyl-coated puffer jacket with a nude tank top; puffers quickly became the must-have outerwear thus far in the new year, seen on the likes of Kendall and Kylie Jenner, Jennifer Lopez, Heidi Klum and more major stars in the past few weeks alone.

Kim herself matched the buzzy outerwear style to another major trend this season, too: leather pants. Her pair highlighted a slick blue finish with exposed stitching and a mid-rise fit. The KKW Beauty founder was also noticeably without her wedding ring as she stepped out on the eve of the news of her divorce from Kanye West.


The final eye-catching element of Kim’s attire came with her choice of footwear. The glowing heels highlighted a pointe-toe silhouette, set atop a unique wedge heel that bears resemblance to a familiar brand in her closet: Yeezy.

The dramatic silhouette of the heel with its subtly curved base is a signature for Kanye West’s line of apparel and footwear, employed in wedges, boots and sandals across his collections. Kim’s choice in particular also taps another common element of Yeezy designs with its reflective uppers; similar wedged mules retailed originally for $680 but can be found on sale for $238 at Farfetch.


When it comes to her own personal style, Kim’s standout combination is just one of many wild pieces in the television personality‘s closet. Kim favors apparel from Kanye West’s Yeezy collections for footwear and apparel as well, in addition to sneakers and boots from his Adidas Yeezy line. She styles the pieces with coordinating looks from every hit brand you can think of — the list usually includes Balmain, Balenciaga, Amina Muaddi, Maison Margiela and Bottega Veneta.

In addition to stylish looks on and off the set of “Keeping Up With the Kardashians,” Kim also dipped her toes into the fashion and beauty world with a mix of ventures. She created her Skims shapewear line in 2019, featuring a mix of inclusive designs and now affordable face masks too. Additionally, the media personality also founded her own makeup line, KKW Beauty, in the fall of 2019.

Elevate your style in these wedges inspired by Kim Kardashian.

Click through the gallery to find more of Kim Kardashian’s boldest looks over the years.