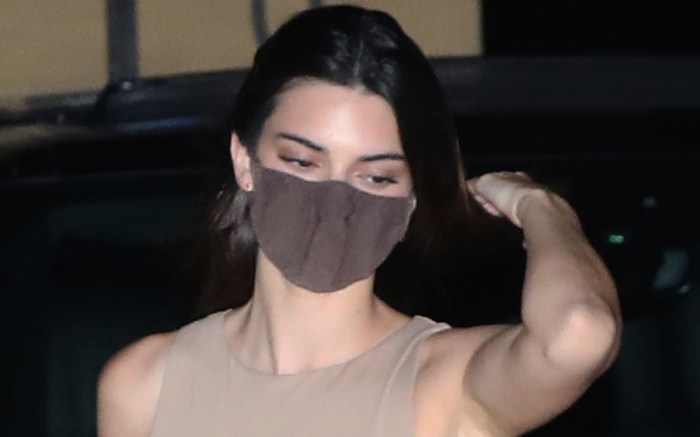 Kendall Jenner gave the monochrome twist an upscale twist this weekend as she grabbed dinner with Fai Khadra in Los Angeles.

Grabbing sushi at celeb-favorited spot Nobu Malibu on Sunday, the model showed off her color-schemed look in a sleeveless crop top and brown leather Nour Hammour pants. Her look also included an $8 Skims face mask and a plush mini bag.

Color-coordinated attire has quickly become the must-see styling hack of 2021, offering a streamlined route into a chic ensemble. Stars like Kourtney Kardashian, Kristin Cavallari and even Jill Biden have tried out the trend for themselves in the past weeks alone.

To give the outfit a pop of texture, the television personality slipped on a set of mixed print kitten heel pumps.

Kitten heels, usually measuring from 1 inch to just under 3 inches in height, are about to be everywhere this spring as celebrities and footwear fans alike make a slow return to lifted footwear. Following a revitalization of flats and comfortable footwear in 2020, stilettos and heightened lifts are still a ways off but kitten heel silhouettes allow for a starting transition towards elevated shoes.

As for Kendall herself, you can oftentimes find the reality television personality in a selection of trending shoes. The supermodel’s closet often includes more of an edgy, tomboyish touch, adding in pieces like chunky Prada combat boots and Dr. Marten brogues. Still, the older Jenner sister appreciates a trending sneaker just like her youngest sibling, Kylie Jenner, previously stepping out in a mix of unreleased styles and buzzy pairs from Nike, New Balance, Off-White and more.

Click through the gallery to find more of Kendall Jenner’s style evolution throughout the years.