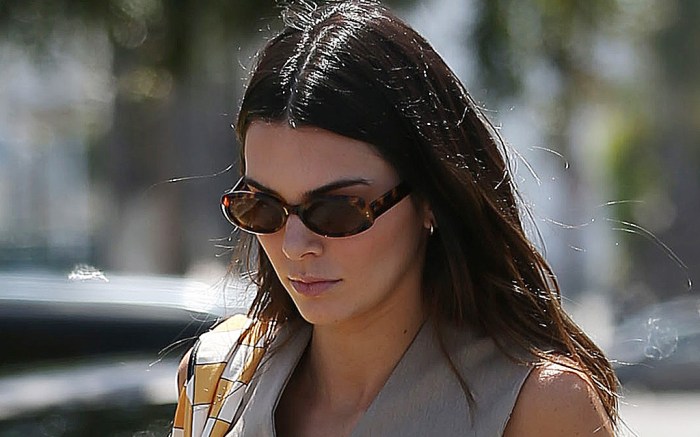 Kendall Jenner brought the trends of the 1990s to the Hamptons this week.

Hanging with Derek Blasberg and friends in East Hampton, New York, on Tuesday night, the model went glam in retro fashion. Her outfit included a risky sheer blouse with strategically-placed panels across the chest. She matched the piece to a silky knee-length black slip skirt in another throwback pick.

Slip dresses, like low-rise jeans and bandana tops, are making their triumphant return from the late 1990s and early aughts; the effortlessly chic silhouette is favorited this year already by Rihanna, Kourtney Kardashian and more top stars and used to be a go-to pick for Longoria herself both on and off set back in the day.

On her feet, Kendall herself rounded out her look with another Y2K design: square-toe sandals. Square-toe footwear returned to the celebrity scene in 2019 and has continued into this year as one of spring and summer’s biggest trends. Be it a classic boot, a flat slide or a towering stiletto heel, the minimalistic silhouette falls in line with the ’90s-inspired revitalization of fashion. Kendall’s own pair includes thin black straps and a low heel; Aeyde offers a similar version at Farfetch.

The supermodel herself is a longtime fan of square-toe sandals and frequents the silhouette for her outings across Los Angeles and New York.

In addition to her trending sandals, you can oftentimes find Kendall Jenner in a selection of trending shoes. The reality television personality’s closet often includes more of an edgy, tomboyish touch, adding in pieces like chunky Prada combat boots and Bottega Veneta clogs. Still, the older Jenner sister appreciates a trending sneaker just like her youngest sibling, Kylie Jenner, previously stepping out in a mix of unreleased styles and buzzy pairs from Nike, New Balance, Off-White and more.

Beyond her own personal shoe style, Kendall also previously starred in campaigns for Longchamp, Stuart Weitzman, Versace and other major fashion powerhouses. The media star‘s go-to picks for off-duty attire include but Far, Fendi, Jacquemus and Hermès as well. Together Kendall and her younger sister, Kylie Jenner, successfully started their own eponymous brand as well; the Kendall + Kylie label serves up a selection of hit apparel, footwear and accessories.

Try out your own twist on square-toe sandals like Kendall Jenner.

Check out the gallery for more of Kendall Jenner’s chic style over the years.