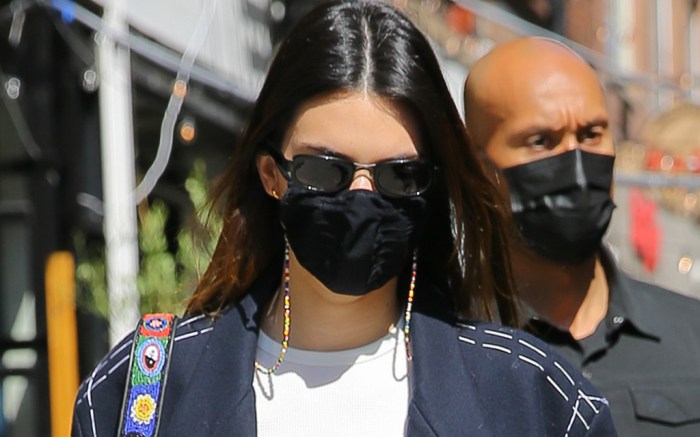 Kendall Jenner continues to prove why she is a master of street style during her trip to New York this week.

Stepping out for a bite to eat on Monday, the model showed off her chic off-duty attire in a layered navy coat, classic white tee and straight-leg jeans. Looser fitting denim is currently leading the Gen-Z-led battle over skinny jeans, with silhouettes like boyfriend and mom jeans winning out over 2000s-favorited tight-fitting pairs.

When it came down to shoes, Jenner channeled the ’90s with one of the decade’s biggest trends: chunky footwear. The media personality opted for a new celeb-favorited platform loafer from Prada; the sleek patent brogues featured a lifted midsole with exposed stitching and a signature silver logo across the strap.

For fans of the style, the trendy chunky leather loafers for $920 at Moda Operandi.

From Prada, Chanel, Dr. Martens and more, loafers are experiencing a comeback on the celeb style scene this season. The silhouette offers an elevated balancing point between a ballet flat, a combat boot or a slip-on sneaker with their versatility and more polished appeal. Stars like Hailey Baldwin, Bella Hadid and even first lady Jill Biden have frequented their own choice of loafers in the past few weeks alone.

Kendall herself opted for a dad-chic version of the shoe trend earlier in the week while shopping around SoHo in an eye-catching sweater vest.

You can oftentimes find the reality television personality in a selection of trending shoes. The supermodel’s closet often includes more of an edgy, tomboyish touch, adding in pieces like chunky Prada combat boots and Dr. Marten brogues. Still, the older Jenner sister appreciates a trending sneaker just like her youngest sibling, Kylie Jenner, previously stepping out in a mix of unreleased styles and buzzy pairs from Nike, New Balance, Off-White and more.

Click through the gallery to discover more of Kendall Jenner’s best looks throughout her style evolution.