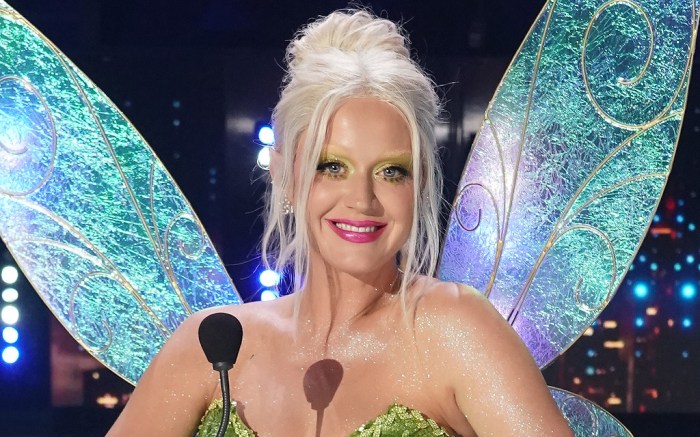 Katy Perry took her “American Idol” style to the next level in the most unexpected way this weekend.

As shared on Instagram on Sunday, the “Daisies” musician transformed into Tinkerbell from Disney’s “Peter Pan” in the boldest way. Modeling a themed green glittering minidress, Perry even bleached her eyebrows and donned a pair of dramatic fairy wings to get into character on set.

Katy Perry herself is no stranger to a bold costume moment, either. In April, for example, she transformed into a mystical mermaid for Resorts World Las Vegas promotional video. Perry gave a closer look at her wildly realistic ensemble from costume designer Cris Araujo that teamed a scale-coated corset with a full mermaid tail complete with iridescent coloring.

The “Firework” singer also has modeled even more wild looks for “American Idol” over the years including life-sized toilet paper and hand sanitizer costumes.

As for Katy Perry herself, the new mom, who welcomed her first child with fiancé Orlando Bloom in August 2020, is no stranger to adding a bold piece to her rotation of ensembles. In addition to wearing standout looks and stylish shoes from Balmain, Bottega Veneta and Giuseppe Zanotti, the Grammy-nominated singer also has her own line of footwear. Perry launched her namesake collection in 2016 as a joint venture with Global Brands Group Holding Ltd.

Click through the gallery for a peek at Katy Perry’s chicest street style moments over the years.