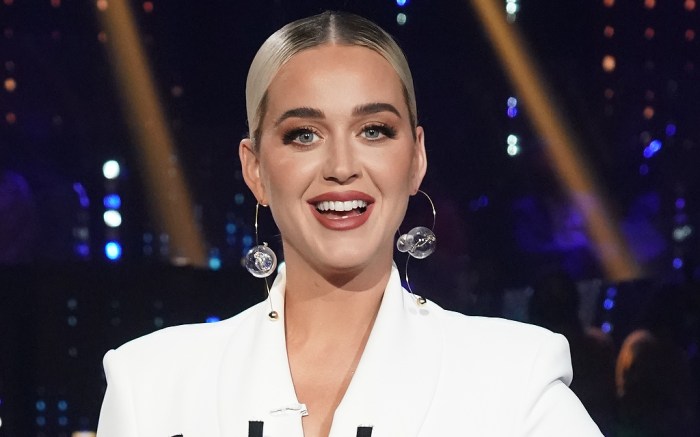 The “Firework” singer went glam for Sunday’s installment of the music competition, layering a structured black corset over a tailored white suit. As styled by Tatianna Waterford, the design comes courtesy of Australian designer Toni Maticevski with similar pieces available at Moda Operandi.

The layered look taps into this season’s newfound appreciation for corseted silhouettes and bustier designs, spotted on everyone from Kim Kardashian and Beyoncé to Saweetie and Hailey Baldwin in the past few weeks alone.


Suiting up also has become the new normal amongst celebrity style trends thus far in 2021, potentially led in part by the first-ever female Vice President Kamala Harris and her neverending lineup of perfectly tailored power suits. Stars including Heidi Klum, Christina Aguilera and more have already pulled off the trend this season with more bold looks to come.

The finishing touch for Perry’s own take on the two spring trends came in the form of lifted stiletto heels with a rounded toe and black suede upper.

For last week’s episode of the ABC series, the “Daisies” musician transformed into Tinkerbell from Disney’s “Peter Pan” in the boldest way. Modeling a themed green glittering minidress, Perry even bleached her eyebrows and donned a pair of dramatic fairy wings to get into character on set.

As for Perry herself, the new mom, who welcomed her first child with fiancé Orlando Bloom in August 2020, is no stranger to adding a bold piece to her rotation of ensembles. In addition to wearing standout looks and stylish shoes from Balmain, Bottega Veneta and Giuseppe Zanotti, the Grammy-nominated singer also has her own line of footwear. Perry launched her namesake collection in 2016 as a joint venture with Global Brands Group Holding Ltd.

Go glam like Katy Perry in these lifted heels inspired by her look.

Click through the gallery for more of Katy Perry’s standout style over the years.