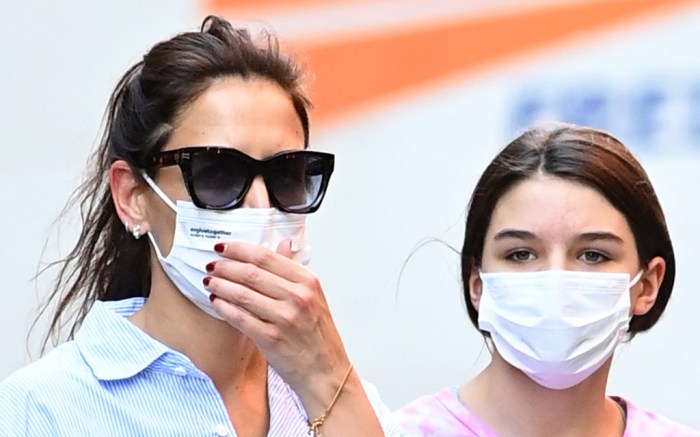 Katie Holmes and Suri Cruise showed off their chic mother-daughter style this week as they ran errands across New York.

The “Dawson’s Creek” alumna joined her 15-year-old daughter for an afternoon of shopping on Tuesday, both leaning into their own personal tastes and style. For the outing, Holmes went mom-chic in a boyfriend-style shirt and flare-hem jeans while Cruise decided on a colorful tie-dye sweatsuit.


When it came down to footwear, both mother and daughter kept up their signature fashion in unique picks that fit generational trends. The award-winning actress’ choice of shoes appeared to tap Gucci in a slick white loafer with a horsebit detail.

From Prada, Chanel, Dr. Martens and more, loafers are experiencing a comeback on the celeb style scene this season. The silhouette offers an elevated balancing point between a ballet flat, a combat boot or a slip-on sneaker with their versatility and more polished appeal. Holmes’ choice retails for $830 at Farfetch.

The teenager then opted for a pair of beloved floral sneakers, a staple in the young star’s closet. The rubber outsole pair came with decorated canvas uppers and a lace-up silhouette, bearing resemblance to classic designs from Converse. While they’ve been around for decades, Converse sneakers are making a comeback amongst Gen-Z style stars like Millie Bobby Brown and Olivia Rodrigo. Similar styles retail for $40 on the brand’s website.


Together under the guidance of Katie Holmes and Tom Cruise, Suri Cruise herself has already developed into a young fashion star. The teenager’s effortlessly cool taste includes everything from classic Ugg boots with ripped jeans to a boho-chic ensemble with Adidas Gazelle kicks.

When it comes Katie Holmes’ own chic style, the star of “The Secret” movie oftentimes favors on-trend silhouettes that are just as stylish as her outfit of choice. The 42-year-old is known for her top-of-the-line style, matching her go-to fall combo — relaxed pants, an oversize coat and a casual top —with everything from Veja sneakers to Re/done kicks and flare-heel Dorateymur boots. As the weather heats up, though, you can find the actress in flowy dresses, more lightweight tops and a rotation of easy-going pieces like trending black “ugly” double-strap sandals.

Beyond off-duty style and impeccable footwear taste, Holmes’ experience in the fashion industry earned her the title of an Olay brand ambassador; she also previously served as the face of Bobbi Brown Cosmetics, Miu Miu, Ann Taylor and more top brands throughout her successful career.

Click through the gallery for more of Katie Holmes and Suri Cruise’s chic mother-daughter style over the years.