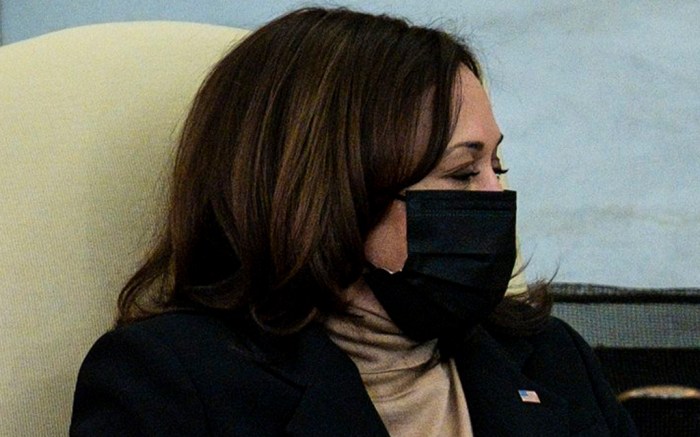 Vice President Kamala Harris joined President Joe Biden yesterday as they met with a group of labor leaders at the White House; the meeting was to address Biden’s American Rescue Plan, a $1.9 trillion relief package for the nation, as well to discuss the President’s infrastructure plan for his term.

For the event, the group came together in the Oval Office with proper social distancing and face masks in tow. Harris herself went formal, matching the room in respective suits and blazers; the vice president gave her power suit a more comfortable finish, though, as she layered in a slouchy tan turtleneck sweater underneath the black ensemble.


As for footwear, the vice president opted for her favorite heels as well. The sleek pointed-toe pumps highlight all-black uppers with a patent sheen, rounded uppers and a steep stiletto heel, bearing resemblance to the Manolo Blahnik set she chose on Inauguration Day. Similar designs retail for $665 on Farfetch.com.

In addition to wearing the sleek pumps on her first day in office, Harris has continued to wear the classic silhouette throughout her inaugural week as vice president. From swearing in officials to meeting with the president, the black heels come teamed with a mix of power suits in all different shades from the likes of Carolina Herrera and Dolce & Gabbana amongst other top brands.


When it comes to her own personal style, the politician can be found in a mix of in-style silhouettes including sneakers from one brand in particular: Converse. The brand’s Chuck Taylor All Star silhouette is one of the politician’s most beloved footwear styles. She opts for a low-top version of the classic sneakers in a relaxed black and white colorway. The style is known for its retro look with exposed stitching, textured outsole and contrasting toe cap, all accented with signature All Star logos and patches.

Click through the gallery to find more of Kamala Harrris’ top footwear looks over the years.