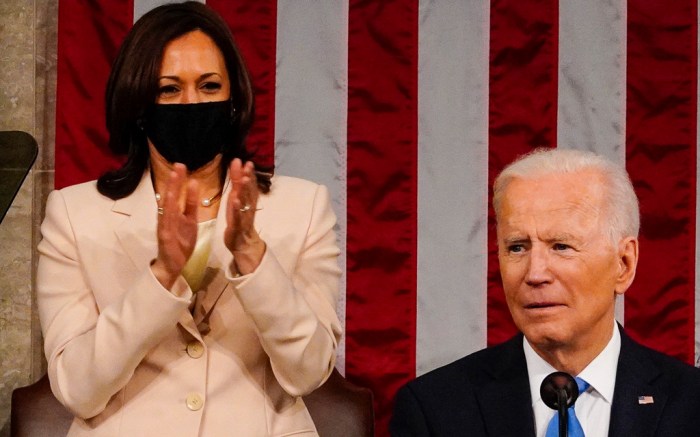 When Vice President Kamala Harris took her place alongside President Joe Biden Wednesday night as he gave his first joint address to Congress, she wore yet another pantsuit.

The second in command chose a hand-tailored suit by Nepalese American designer Prabal Gurung. In a cream double crepe fabric with two buttons, accented with double crepe suit and an ivory silk charmeuse camisole underneath, the look was both strong and feminine. But it also held a deeper meaning than the VP’s average power suit.

By tapping Gurung for this historic occasion, Harris, who is of Indian-Jamaican descent and serves as the first-ever Asian American vice president, wore her support on her sleeve — literally — for the Asian and Asian American communities who have faced increased hate crimes and discrimination in the United States in recent months.

The designer himself shared the look on Instagram last night with a meaningful message.

“To see Madam Vice President continue to break barriers while wearing a Prabal Gurung ensemble to the Joint Session Congress at the United States Capitol in Washington, DC., fills me with the utmost joy and gratitude. A fellow child of immigrants and the first-ever female, Black and South Asian Vice President, her vision and tenacity inspire me—a Nepali American, Singaporean-born, Nepal and Indian-raised designer, daily,” wrote Gurung.”

“I am so honoured to be part of this historical moment and am humbled by the visibility and re-energised in my mission to advocate for representation and create better paths for the future,” added the designer. “Here’s to dreams and manifesting them into reality with the love and support from your community.”

Watching the speech, too, in symbolic attire from the socially distanced crowd was Jill Biden.

Alongside Harris’ husband Doug Emhof, the first lady stood to accept her own round of applause as she modeled a custom-made Gabriela Hearst number. The dress highlighted a navy silk wool fabric and a mesh overlay featuring a series of flowers; according to the brand, each embroidery represents the federal flower of every state and territory of the United States along with the District of Columbia.

Click though the gallery to find more of Kamala Harris’ suited style over the years.