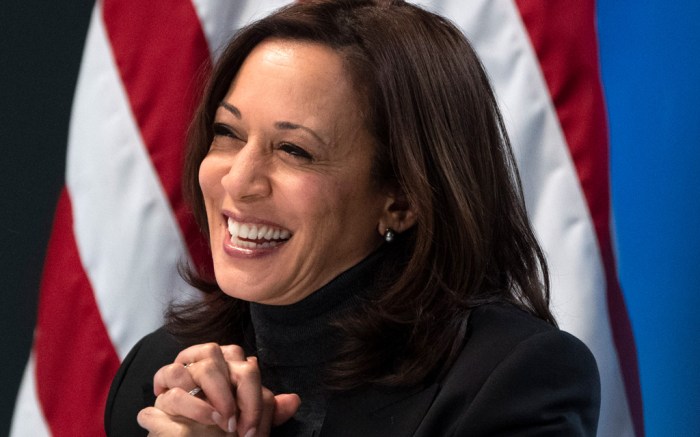 Vice President Kamala Harris held a virtual roundtable from the Eisenhower Executive Office Building in Washington D.C., on the topic of President Biden’s American Rescue Plan. The roundtable brought together top female leaders in advocacy groups as well as from Congress to discuss the administration’s proposed $1.9 trillion relief package for the nation.

For the meeting, Harris followed suit with her signature style, layering a black blazer over a gray turtleneck sweater with coordinating tailored trousers.

On her feet, the second in command swapped out her typical sleek pumps for a set of pointed-to booties. the sleek leather pair included a mid-height stiletto heel for a subtle boost along with Chelsea-style elastic goring for comfortable wear.

In addition to wearing sleek Manolo Blahnik pumps on her first day in office, Harris has continued to wear the classic pumps throughout her inaugural week as vice president. From swearing in officials to meeting with the president, the black heels come teamed with a mix of power suits in all different shades from the likes of Carolina Herrera and Dolce & Gabbana amongst other top brands.

When it comes to her own personal style, the politician can be found in a mix of in-style silhouettes including sneakers from one brand in particular: Converse. The brand’s Chuck Taylor All Star silhouette is one of the politician’s most beloved footwear styles. She opts for a low-top version of the classic sneakers in a relaxed black and white colorway. The style is known for its retro look with exposed stitching, textured outsole and contrasting toe cap, all accented with signature All Star logos and patches.

Click through the gallery to discover more of Kamala Harris’ top footwear moments over the years.