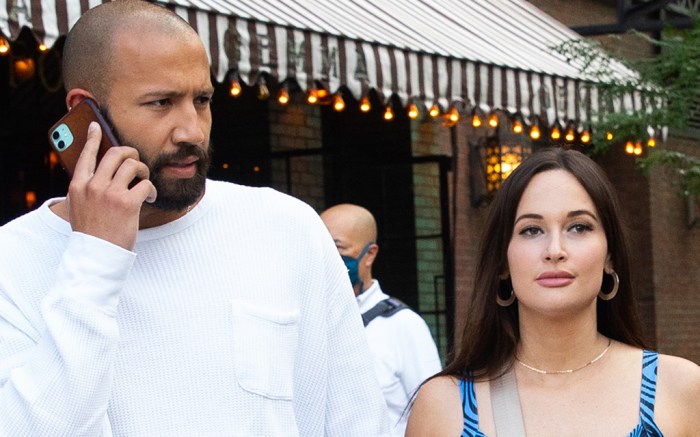 Kacey Musgraves broke out one of this summer’s most beloved trends for a chic outing with her rumored new beau Cole Schafer.

The “Golden Hour” singer walked hand-in-hand with the writer in New York yesterday for an outing by the Bowery Hotel in a workout-ready look. The blue athleisure moment featured a coordinating sports bra and leggings set with a mind-bending black print, accessorized further by a crossbody bag and dainty jewelry.


On her feet, Musgraves decided to go comfy-chic in tan double-strap sandals.

Typically considered “ugly” in the world of fashion, the new appreciation for comfortable sandal styles comes with an increased desire for ease of wear and stability in the fashion world amidst the current environment — and for 2021, too, it appears the shoes are here to stay. Brands like Teva and Gucci are at the forefront of the trend while celebs including Britney Spears, Tracee Ellis Ross and Katie Holmes can oftentimes be spotted in the silhouettes.


Earlier in the weekend, the couple stepped out once more for another stylish outing. The “Step Off” musician decided on a relaxed look again thanks to her tropical shirt, white crop top and denim shorts. As for footwear, there was an elevated element that came in the form of see-through sandals.

PVC footwear rose to prominence in 2018 and has since become a staple on the celebrity style scene. Brands like Gianvito Rossi, Christian Louboutin and Givenchy have jumped on the clear shoe train with bold heels and studded designs that flatter the foot and elongate the legs. In addition to stars like Xtina, J-Lo and Cardi B, the Kardashian-Jenner sisters as a whole are huge fans of the trend.

Kacey Musgraves came onto the scene when she appeared on USA Network’s “Nashville Star” competition in 2007. Since then, she has gone on to win endless awards, including the 2019 Grammy Award for Album of the Year.

The “Slow Burn” singer is best known in the fashion world for her chic and sweet style. Her varied taste ranges from $80 Aldo shoes to designer heels from Christian Louboutin and Sophia Webster. The singer has also had recent ties to Moschino, attending a few of the brand’s shows and featuring in its recent Sesame Street collaboration.

Click through the gallery for more of Kacey Musgraves’ style evolution over the years.