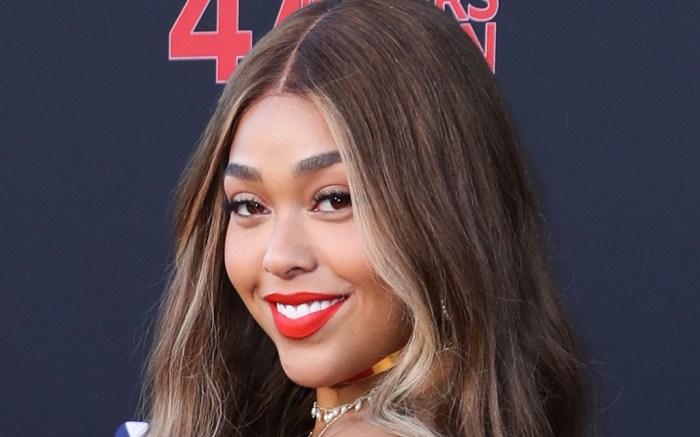 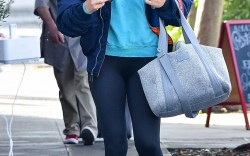 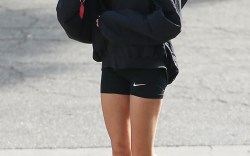 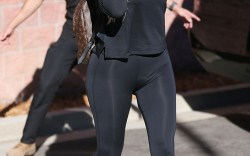 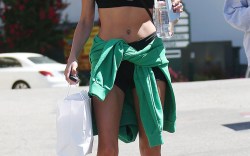 The model showed off an extra glam end to the weekend on Instagram yesterday, posing in a bold twist on a little black dress; the halter design included a V-neck silhouette with daring peek-a-boo cutouts across the torso with a crystal-coated edge.

Amongst a revitalization of 1990s and early 2000s silhouettes, cutout designs as well are making a triumphant return to the celebrity style scene this season from Cult Gaia’s beloved twisted dress to Monôt’s peek-a-boo designs. Stars like Saweetie, Kim Kardashian, Katie Holmes and more are major fans of the trend for summer.

The finishing touch for Woods’ own glam moment came in the form of eye-catching wrap sandals. Set atop a silver stiletto heel, the sandals featured a snaking design that coated the foot in layers of embellishments. Favored by Kristin Cavallari, Lizzo, Cardi B and more, ankle-wrap heels are all the rage this summer with heels that snake across the ankle and calf for a standout punch and a supported fit.

Another trend that Woods herself likes to favor is classic athleisure. Earlier last week, for example, she joined Beau and NBA athlete Kar-Anthony Towns for a stylish couple’s workout. At the gym, the media personality oped for a coordinating pink sports bra and biker shorts look with sneakers from Kanye West’s Adidas Yeezy line.

As for Woods herself, the media personality recently started her own workout and home gym plans titled FrstPlace and came off a surprising appearance undercover on Fox’s series “The Masked Singer.” The social media influencer has previously joined forces with fast-fashion label Boohoo in both 2016 and June 2019 for a size-inclusive collection that aligns her message of body-confidence with Boohoo’s offerings for women of all shapes. She also launched a size-inclusive activewear line called Secndntur in August 2018.

Channel Jordyn Woods in these glittering heels inspired by her look.