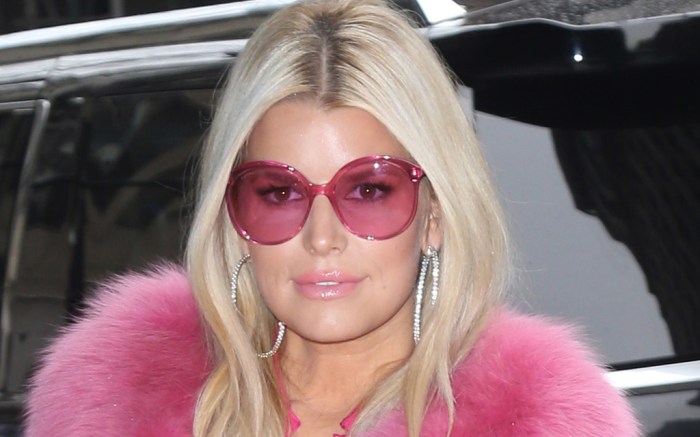 Jessica Simpson blessed fans with not one, not two but three standout looks in a row last night.

Posing in a mix of designer brands, the “Employee of the Month” star showed off a behind-the-scenes view of her styling sessions for “Good Morning America” and more. In one look in particular, Simpson stood out in a neon pink sweater, courtesy of Tom Ford, tucked into a crinkled leather Saint Laurent midi skirt.

With help from her stylist Nicole Chavez, Simpson once more tapped Saint Laurent for her footwear off choice. The knee-high boots featured a smooth patent leather upper, set atop a sharply pointed toe and a lifted stiletto heel. Similar designs from the brand retail for almost $1,500 at Farfetch.

Once more opting for the French fashion house in a second look, the “Dukes of Hazzard” alumna gave her Prada ensemble a platform boost in another set of thigh-skimming boots.

A third and final ensemble in Simpson’s impressive slew of looks tapped Balmain in a twist on suiting up. The perfectly tailored red jacket-style top including military-inspired buttons with flare-hem gray suit pants to match, hiding her shoes for the outfit.

Known for her own style of footwear, Simpson launched her shoe line in 2005 in partnership with the late Vince Camuto. The Jessica Simpson Collection is currently owned by Sequential Brands Group, and it offers a range of affordable styles, including shoes as well as clothing and accessories for women and children. Simpson has additionally won big at FN’s annual Achievement Awards, taking home Launch of the Year in 2005. Simpson also recently announced that she will be partnering with Amazon Studios for a series of projects based on her own life. The joint effort will produce three separate entities following different parts of the actress’ career and backstory.

When she’s not clad in footwear from her eponymous brand, Simpson can often be found in soaring styles from the likes of Saint Laurent, Jimmy Choo and Stuart Weitzman. The “With You” singer has also selected in recent months selected multiple pairs of snake-print knee-high boots from Villa Rogue, as well as Gucci combat boots and Fendi sandals.

Stay on trend like Jessica Simpson in these knee-high boots inspired by her look.

Flip through the gallery to see more of Jessica Simpson’s hottest heels over the years.