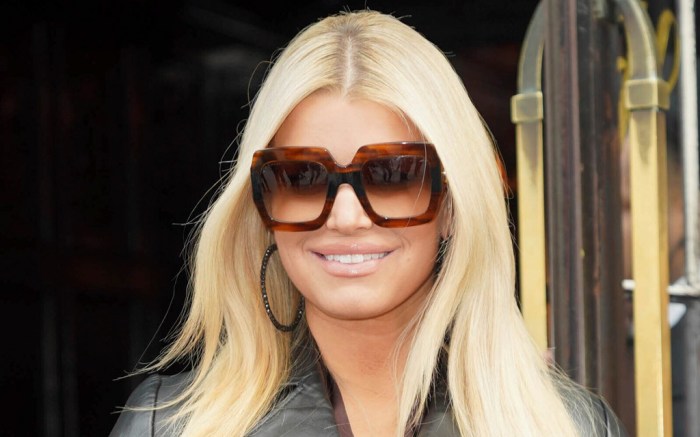 Jessica Simpson’s spring collection is here and who better to model the new line than the actress herself.

The “Dukes of Hazzard” star posted for her brand’s warm-weather capsule this week, appearing on its Instagram page in a stylish twist on the classic Canadian Tuxedo. Simpson’s look included a coordinating $90 jean jacket and $60 flared bottoms, both coated in a subtle cheetah print.

For a finishing touch to the western-chic look, the “Employee of the Month” actress opted for a sky-high lift courtesy of her own label. The Dessie sandals feature a boosted platform toe with a coordinating block heel that measures close to 6 inches in height; finished off with a securing ankle strap and a thickened cross-foot design, the platforms retail for $110 at DSW.

Known for her own style of footwear, Simpson launched her shoe line in 2005 in partnership with the late Vince Camuto. The Jessica Simpson Collection is currently owned by Sequential Brands Group, and it offers a range of affordable styles, including shoes as well as clothing and accessories for women and children. Simpson has additionally won big at FN’s annual Achievement Awards, taking home Launch of the Year in 2005. Simpson also recently announced that she will be partnering with Amazon Studios for a series of projects based on her own life. The joint effort will produce three separate entities following different parts of the actress’ career and backstory.

When she’s not clad in footwear from her eponymous brand, Simpson can often be found in soaring styles from the likes of Saint Laurent, Jimmy Choo and Stuart Weitzman. The “I Wanna Love You Forever” singer has also selected in recent months selected multiple pairs of snake-print knee-high boots from Villa Rogue, as well as Gucci combat boots and, of course, Fendi sandals.

Click through the gallery to find more of Jessica Simpson’s best footwear moments over the years.