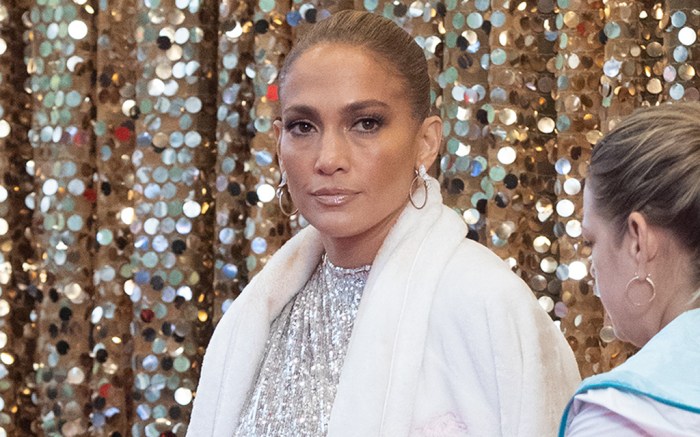 Fans got a first look at Jennifer Lopez’s upcoming film “Marry Me,” revealed today by Lopez’s own stylist, Rob Zangardi.

The clips on Zangardi’s page show a dolled-up J-Lo alongside her costar and fellow musician Maluma as the duo posed for a photoshoot with flair. While Maluma modeled a satin tuxedo with black lapels, the “On the Floor” songstress went glam in a feather-coated gown from Giambattista Valli; the course design came complete with snaking arm decor and an elongate hem to balance the dramatic sleeves.

The finishing touches of Lopez’s look include a glittering, netted headpiece along with jewel-coated drop earrings.

While the film doesn’t release until February 2022, a few of Lopez’s on-set ensembles were already been spotted when the actress appeared on set in New York back in October 2019. In one scene, she steps out of a car in an unmissable wedding dress complete with a matching veil and sky-high white platform sandals.

It was just last year when the “Let’s Get Loud” singer herself dipped her own toes into the footwear industry. Though she had previously worked with a mix of brands on collaborations and campaigns, the JLo Jennifer Lopez collection at DSW is the musician’s first solo line; the label includes a variety of stylish footwear ranging from sky-high platforms and glittering pumps to strappy sandals, all retailing from $59 to $189.

As if all of her titles were not enough, the past few seasons alone, the “Hustlers” actress also has been featured in three major spring ’20 campaigns as well as a few top names for fall ’20, too. She modeled for Versace, stars in ads for Guess and Coach on top of serving as a judge and executive producer for “World of Dance.” She also teased a new J-Lo Beauty line earlier this season as well.

Click through the gallery to find more of Jennifer Lopez’s most glam looks over the years.