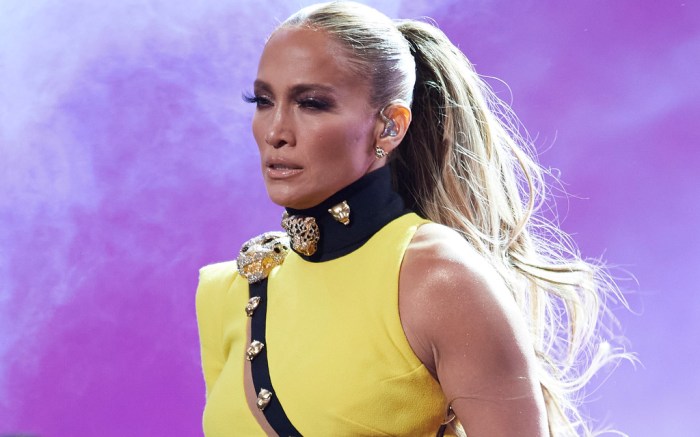 Jennifer Lopez brought her bold style to the stages of Global Citizen’s “Vax Live: The Concert to Reunite the World” on Sunday night.

Though the show doesn’t officially premiere until May 8, performances took place last night in Inglewood, Calif. The event “celebrates hope as families and communities reunite after receiving the vaccine, and calls on world leaders to step up for equitable distribution of the COVID-19 vaccine,” according to Global Citizen’s website.

Taking to the stage alongside host Selena Gomez as well as Prince Harry, Chrissy Tiegen and more, J-Lo herself debuted a mix of three bold performance ensembles. Two of her looks — a one-shoulder studded minidress and a neon zip-up bodysuit — both came matched to sleek black leather knee-high boots.

A third ensemble for the event tapped Zuhair Murad in a glittering, feather-coated jumpsuit. The rose gold number comes from the Lebanese designer’s spring ’21 couture collection.

Global Citizen’s “Vax Live: The Concert to Reunite the World” premieres on May 8 at 8 p.m. ET on select channels including ABC, CBS and Fox; the show will also air on YouTube with a free livestream. In addition to Jennifer Lopez, you can expect performances from H.E.R., the Foo Fights, J Balvin and Eddie Vedder. The president, first lady and vice president are all expected to make appearances throughout the event as well.

Click through the gallery to find more of Jennifer Lopez’s glam style throughout the years.